And so we arrive at an early start for the final film location shoot for 'Village Day,' and it involved that white membranic village guardian, which we inflated by attaching the balloon to the exhaust of the car!

Filming took place at on the local golf course, with me running through trees , up and down paths with Rover in pursuit, actually attached by wire to the belt of my trousers, and peering through bushes the McGoohan way!
Then we were confronted by two green keepers who could not believe that there was a bloke on the fairway with two women and a big white balloon! The two women being my wife - controlling Rover, and our camerawoman. I quickly explained what we were doing, and all was well because the head green keeper knew of ‘the Prisoner.’

I had previously found a local olde worldy public house in which to film an interior scene for the film, the Prisoner's local. However by the time the filming was to take place, the public house had been completely refurbished! Gone the old beer pumps to be replaced by ugly modern ones! Oh well, there was no going back. The set was dressed by a few people drinking, and Doris was behind the bar. When we filmed the interior seemed to be well lit by it's own lights. However the finished product turned out to be slightly darker!
People began to arrive as early as on this day ten years ago, for the final shoot of Village Day. Not everyone who came were actually involved with the weekend shoot, but wanted to come and watch what would be happening, And do you know I was the only one in the scenes who didn't go through make-up!
Anyway the shoot began in the Blue Bell public house. is the barmaid, with a few regulars scattered about the bar. In walks our hero, after parking his car outside, as he checks out his brother's local. Of course the exterior filming of the public house was carried out some months previous in , outside the Castle public house. He questions , and shows her a photograph of the man he's looking for. But hasn't seen him for some time. asks the man if he'd like another drink? Asks if he's in some kind of trouble? He isn't, but someone's going to be! Then leaving the Blue Bell our hero steps out through the door, to his waiting Caterham Super 7 parked outside the Castle public house in , so the finished film was cut.

MUSIC MAKES FOR A QUIET

MUSIC BEGINS WHERE WORDS LEAVE OFF 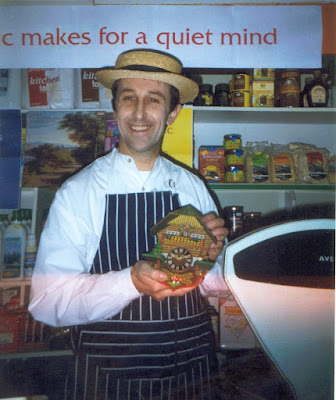 Later in the evening the shoot continued at the Green Grocers, after the shop had closed. The proprietors, who were very helpful and extremely interested to see what we were doing, and kindly permitted us to take over the shop, and convert it to the General Store in the village. This was done by the use of posters, records, and The Tally Ho newspaper rack. And not having the camera zooming in on tinned produce, such as the tins of Heinz Tomato soup, baked beans, and Wrigley's Spearmint gum which were obvious "special Imports! The proprietors got out an old pair of weighing scales from the 1960's to try and give that extra little ambiance. Posters were put up, and a selection of records helped dress the set, along with copies of The Tally Ho.
As a footnote, the proprietor was not unknown to film work. As her husband had been an extra in the film 'Buster' about one of the gang who helped carry out the Great Train Robbery in the 60's. The railway scenes for Buster were filmed locally at the Great Central Railway.
The next day it was the very last location shoot, at a local cemetery. Only the Prisoner and a mysterious woman grieving at a graveside were required for this scene.
The production of 'Village Day' had been full of pitfalls, with problems arising all the time, which is part and parcel of filmaking. But when all is said and done, everyone who worked on the film got something out of it. A chance to demostrate their skills. For Members of Six of One to put their skills into a society project, and at the same time enjoy themselves.
What did I get out of it? Well I learned a great deal, I picked up a few skills along the way, and I did enjoy producing the film. But I suppose above all I learned something of what Patrick McGoohan must have gone through when he was producing 'the Prisoner.' No, not to put myself on a parallel with McGoohan, but a man to sympathise with him. But above all, despite all the problems, I did enjoy producing the film.
But my work was not yet over - the film had to be edited together. The music finished. The film transferred onto video for release to the membership of Six of One. And above all there was a film premier event to organise. But thats all for next time.

I'll be seeing you
Posted by David Stimpson at 09:26