Filming on set began with a journey up to Wallasey on Merseyside, ready for the weekend shoot, the interior location shoot in No.6's cottage, which had been constructed some years before by a fan of ‘the Prisoner’ in her attic. This turned out very nicely for the film, and of course for our friend whose attic construction would appear in the film Village Day.
So having packed and making sure that nothing would be left behind, we set off on the journey up to Wallasey. We said that we would arrive at about , and having set off at , arrived bang on the estimated time of 4,30.
The shoot would not begin until tomorrow, which left time to take a look at the set, and gauge camera angles and the like in No.6’s cottage.
I had of course heard of this reconstruction of No.6's cottage in an attic, but had never seen any pictures let alone stand inside the cottage, which on first seeing, was greatly impressive and difficult to take all in at first. But as you sit and begin to take the cottage in, looking at the detail, you see that it's not quite as impressive as it was at first glance. However the interior would suit the film very well, and tomorrow the hard work would begin, and me not at my usual 100% in health, as I had a terrible cold at the time. 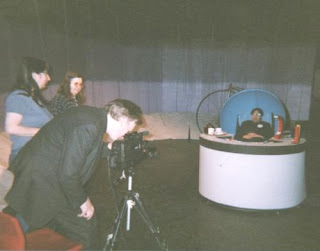 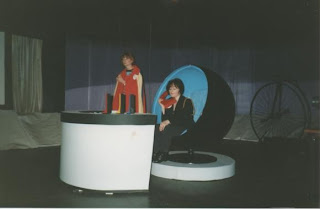 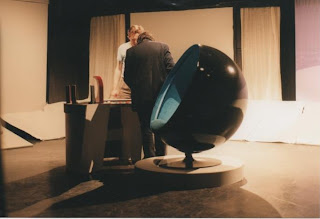 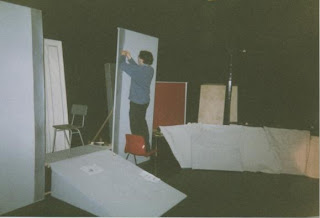 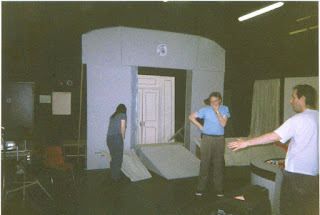 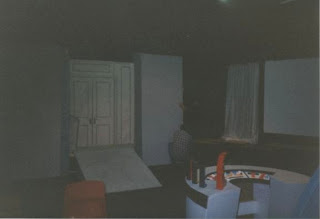 The interior set of the Green Dome had been pre-fabricated at a friend’s home in Wallasey, then to be transported to a school where it would be erected on the school’s sound stage. A group of us had come together for this, actors doubling up as construction workers. We had a large wall screen set up, and six people operating the pair of steel doors of No.2’s office, three to each door. Max Hora brought along his penny farthing bicycle, and his Eero Aarnio chair, which he had allowed us to have painted black. Max by the way was word perfect for this filming as No.2. Morag was there as the new No.2, along with her assistant, and a doctor. We had but two days for the whole shoot, which had to include the Laboratory, and the Prisoner opening the double doors to an empty, and long deserted office.
The actual filming went as smoothly as it could, however our camera woman, who had constructed the set of the Green Dome in pre-fabricated form, had had an operation a few weeks before, and she was not at her best. But like a real trooper carried on with the light work of filming, and making final adjustments to a few of the props. It was the actual construction of the Green Dome set that was the hardest part. It had been intended to incorporate the steel framework which surrounds the original Green Dome interior like a cage. We had one made out of wood, in fact the whole set was made out of wood, including the pair of steel doors, which worked perfectly. But  the framework we found impossible to attach to the circular wall. So we had to abandon that idea. It had taken a whole day to construct the Green Dome set. It wasn’t perfect not by any means, but the job had been done, and we had to make the best of it, and besides we were working on a shoestring budget. This left one day to film, and demolish the set.
Once the filming of scenes in the Green Dome had been completed, it was all hands on deck to demolish the set, and create the set of the laboratory. This consisted of a wall screen, a table for the body to lie on. A TV monitor, wires, medical equipment, and a great deal of blackness, suggesting the room is actually bigger than it really was. 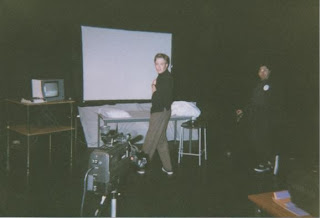 The next shoot was the simplest of all, it was myself as No.6, breaking into the former No.6’s cottage and making a search. We had filmed myself as No.6 outside the cottage during the Portmeirion shoot, entering in an exterior shot, then via an interior shot from inside the cottage. It was quite remarkable. I recall first walking in, and could actually believe that I was in No.6’s cottage in the Village, especially when the Village soundtrack tape was being played, sounds from outside as it were, music and the like. 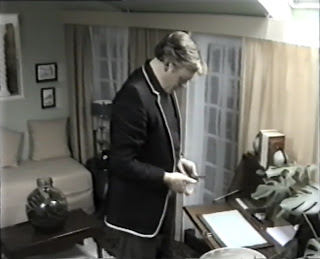 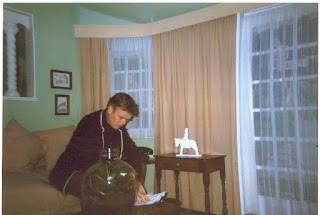 Be seeing you
Posted by David Stimpson at 09:39