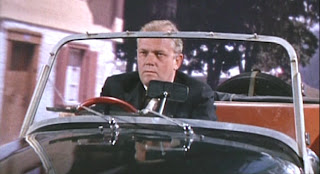 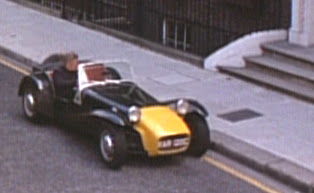 LCK 88D is the correct license plate number of the Lotus 7 a replacement car for the Lotus demonstrator KAR 120C which had been sold abroad and dispatched to Australia, later to be written off in an accident. LCK 88D this Lotus 7 belonged to mister Frank Rycroft, a local man living in Borehamwood, who had bought the car from Peter Warr who was a racing driver and manager of several Formula One racing teams in his time.  Mister Rycroft was paid between £400 - £500 for a two week use of the car. When the car was returned to Mister Rycroft the car had been slightly damaged, as it had been fitted with two new fibreglass wings. After the production crew had used the car, Mister Rycroft sold the car.
The car is supposedly driven by Nigel Stock in the episode 'Do Not Forsake Me Oh My Darling,' only you never see him driving. Stepping in and out of the car yes, but never actually driving. You see more of Patrick McGoohan driving KAR 120C in the episode! What about driving all the way to Kandersfeld in Austria? Well he never really went did he? The car was put on a frame in front of film shown on a screen behind the car!
I have tried to get a picture of the man driving LCK 88D on it's way to Dover, but I cannot get a clear enough still from the film, so to try and identify the driver.