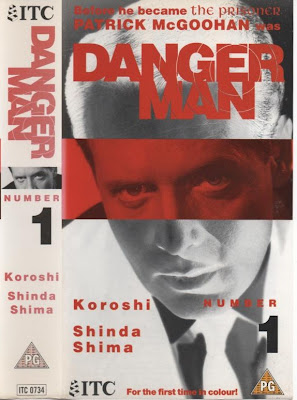 I have arrived at the point when in 1968 there was a two week break in the screening of 'the Prisoner,' because the screening had caught up with the production of the series. It was at this time that the two colour episodes 'Koroshi' and 'Shinda Shima' were screened, tonight it's 'Koroshi.' A Japanese girl dies after sending M9 information of a series of planned assassinations. Posing as a reporter Drake arrives In Tokyo to investigate and finds himself up against an ancient murder cult which has been brought very much up to date. Those agents who assigned to kill, kill by the use of "the blow of oblivion!"!
I have watched this episode on a few occasions, and during the opening sequence, it has always occurred to me that Patrick McGoohan would much prefer to be somewhere else!
I'm obliged!
Posted by David Stimpson at 08:47