This Week I Am Mostly Watching 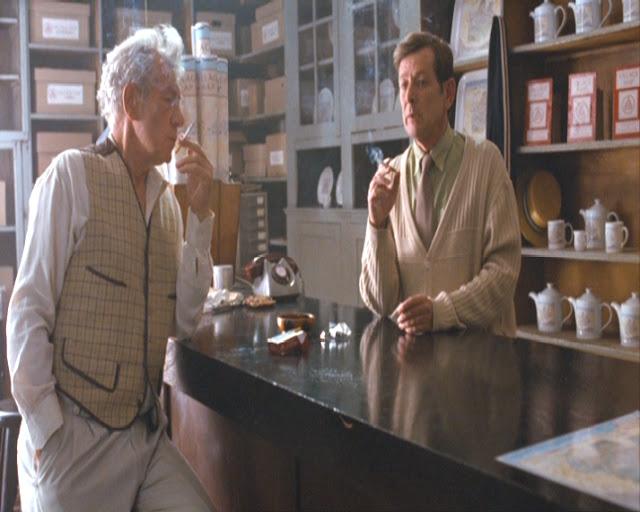 In the Village Store, which has everything for your needs, just so long as its a Village map you wish to buy! 37927 enjoys a cigarette with Un-Two. The cigarettes are illicit, sold from under the counter, which is curious, as many shops here in the UK now having to sell cigarettes from under the counter, and not allowed to be seen on display.
After Un-Two has left the Village Shop 37927 telephones the Clinc to report Un-Two, just as in the original series after No.6 has left the General store in 'Hammer Into Anvil,' the shopkeeper reports No.6 in the same sneaky way to Number 2.
'Schizoid' is all about doubles, or the alter ego of Six, being two-times-Six. Two hasn't a double, that's simply Two playing the role of Un-Two, yet Two imperosnators, are, according to Two, a danger to the Village, and in the end 37927 is accused of being a Two impersonator, and is taken off to the Clinic for treatment, plus he's wearing the old school scarf. Two never wears the old school scarf, not in this series anyway.
Two-times-Six wants to kill Two in revenge for the death of 4-15 in the previous episode. But isn't that how Six feels, so it must be Six who wants to kill Two.
Are there in fact two Six's in the Village? Has Two discoverd a way of splitting the human psyche? Because even though at times Six seems to be struggling with his inner-self, at other times there is the physical presence of two-times-Six, 147, 313, and Two has seen two-times-Six!
Two has some wonderful lines in this series.

"Impersonating Two is an act of treason. In the event of a Two impersonator arising, you must seek him out and apprehend him. This man may look like Two, but you will know that he is not Two, becasue he is not Two. He may appear in the Village in a dishevelled state, which has resemblances to Two. He may claim to be Two, but he is not, and he must be treated as who he is, which is someone who is not Two. He is a danger to the Village."

Also when Two and his body guards go to the 'Go-Inside' bar, he pays tribute to the original series, by looking up at a Penny Farthing bicycle suspended from the ceiling, a nice touch I thought.
Poor old 11-12, he is desperate to go to the 'other place,' but that is only possible for the people who exist there, and who are brought to the Village. For those like 11-12, born of the Village, there can never be anything other than the Village, as 11-12 does not physically exist.

Remember, Village is best for us.
Posted by David Stimpson at 09:26