In 'Hammer Into Anvil,' when Number 14 accuses Number 6 of being a troublemaker. 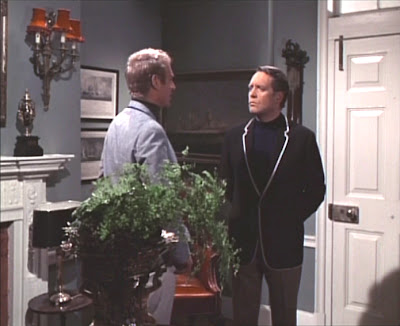 We know what Number 14 would like, really like, and that's to dust Number 6 down, he'd really enjoy it. Well of course there's nothing stopping him, and Number 6 suggests Kosho. Number 14 challenges Number 6, and Number 6 accepts.
Whenever I watch this scene, ever since my wife said something about Number 14 dusting Number 6 down, I cannot help but see Number 14 offering to dust Number 6 down with a clothes brush!
As for the Kosho scene, it must have been a long and exhausting bout, as we see but a fraction in 'Hammer Into Anvil,' the majority of the film footage is later used in the episode of 'It's Your Funeral.'