This Week I Am Mostly Reading 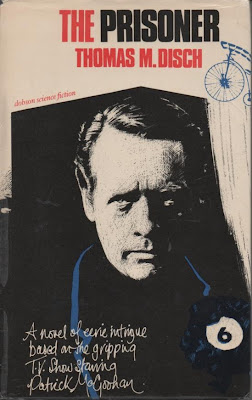 I purchased a copy of this book via ebay, I'm not at all sorry that I did, for I did so for sentimental reasons really. Back in the early 1970's this book was my only link to 'the Prisoner,' although the book itself has nothing to do with the actual series, it is based on the series. It was the front cover of the book really that was my link to 'the Prisoner,' even if the designer of the cover had given Number 6's blazer blue piping instead of off-white.
I used to take a copy of this book out of my local library time and time again, and I would read it. I'm reading the book again now, and to be perfctly honest I'm struggling to hold my concentration with it. I mean since when did the Village have a Railway Station? Ah, in the Village of THEPRISO6NER-09 there is an old disused Railway Halt, but that's got nothing to do with the original series. But like the 09 series, in which Two brings Lucy to the Village in order to break Six's heeart, in the same way Number 2 brings Lora a girlfriend of Number 6's to the Village.  Number 6 does become Number 2 after the Number 2 escapes by.......helium balloon. But I find there is a distinct lack of discription of the Village in Disch's novel. For me, the only thing that makes this a novel based on 'the Prisoner,' is the cover of the book, and the use of numbers instead of names, not that names or not used in the book. I think Disch's novel was an easier read back in the early 1970's when I had no access to 'the Prisoner' series itself, as I do today.