Why the ships drift anchor as a folly in the middle of the desert? I have absolutely no idea, as that was never explained, and follies are rarely explained. "Follies are as follies do" as Braithwaite would say, they need no explaining, otherwise they would not be follies. Personally I think it would have been a nice tribute to the original series to have had a canopied penny farthing bicycle discovered by Six, half buried in the sand.
Originally there was the idea to have a full-sized ship attached to the sea anchor, but it was plain to see that that was just one step too far. However, along with the ships sea anchor, a lifeboat from a ship can also be seen in the desert. 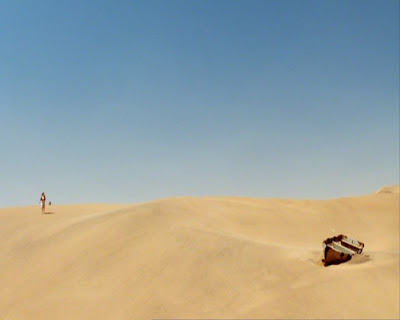 So Michael took over as the boss of Summakor, Michael sat in the chair in the control room like a Supervisor amongst so many observers sat at their monitors. Such is the modern day take on the Village Control Room.
I don't see it, do you, what it was that sent 313 running out of that dark corridor in ‘Checkmate.’ You see it was said that all the questions will be answered in the final episode, well the basic ones maybe. Not the fact that no-one in The Village seemed to actually pay for anything. Not even why wraps were the basic nourishment in The Village, or exactly what the Therapy Zone is. And did you notice just how Six spent so little time in his apartment in The Village? And why did Two's wife give The Village a fifties/sixties atmosphere, even 313 rode a sixties style bicycle!
Despite what fans of the original series might think, basically the two series are not that dissimilar from one another. Okay you haven't got the quirkiness of the original, there are no huge painted backdrops as used in the original, no studio sets purposely built, and in it's way there is less style of the original series in the reinterpretation, with Two the stronger of the characters, Six being the weaker. But if you take away the "filler" episodes of the original series, episodes like ‘Living In Harmony,’ ‘The Girl Who Was Death,’ ‘It's Your Funeral,’ ‘A Change of Mind,’ ‘Hammer Into Anvil,’ ‘A B & C,’ originally McGoohan envisaged ‘the Prisoner’ being only a 7 episode series. So if McGoohan had managed to get his way, instead of having 17 episodes, you would have only 7. Because when you look at the original series, there are some which basically are really unnecessary to ‘the Prisoner,’ and are considered as simple "fillers" used to "pan out" the series.
The Village has a postman, he delivered Six's Clinic appointment card you'll recall. But does it have a newspaper I wonder? And to get on the bus in The Village, and to get off the bus and arrive in the Village is just the wildest thing!
Undercovers, they watch and report on people who become suspect "Dreamers" they call them. Well here's a right pair of "Undercovers" you're ever likely to meet.
909 and Six. Here they are "undercover" at the swimming pool as they watch 1955 who is suspected of being a "dreamer."
I mean aren't "Undercovers" meant to blend into the background? These two, 909 and Six, seen here on the right of the picture, stand out like two sore thumbs. I mean if you're going undercover at the swimming pool, then wear trunks. Sit down, blend in, like those other people by the pool, who themselves could be Undercovers. The thing about Undercovers, the Undercovers are never told who the other Undercovers are. And a "cell" of Undercovers never tells other Undercovers who they are. So it's possible that everyone in The Village is an "Undercover!"
If a Village death isn't an actual death, in the way Two died having blown himself up with a hand grenade, and by which he returns to that "other place," as others have who have died in The Village, then that means that no-one is actually buried in The Village cemetery. And that can be said of the original series, as Cobb died in The Village, there
was his funeral of course, but then Cobb wasn't actually buried in The Village graveyard - was he? Cobb was allowed to leave The Village to return to the "other place." It's not exactly the same thing I know, it's more of an interpretation, as is THEPRIS6NER series itself.

THEPRIS6NER
Soon after the release of THEPRIS6NER on DVD, I went there to enquire about this soundtrack cd, and do you know what I learned? That it's been deleted! Apparently it was available from last January, but I've not seen it in HMV. Anyway, there it is, stricken from the list! The soundtrack is still available through downloads from the Internet, but that's not quite the same for me. It's the actual article you see, the packaging, having the article in one's hand. True, the soundtrack to THEPRIS6NER isn't very inspiring I have to say. I'm sure no doubt I'll get a copy of this, given time, off ebay perhaps or through Amazon Books. And no doubt in years to come this item will have become a real collectors item.
However I did acquire the soundtrack on cd, at Christmas 2010. Which must have been no little effort, because the cd is only available from America od Switzerland.