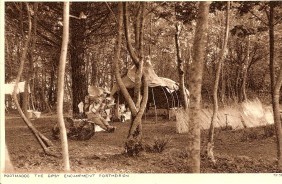 I found this 1920's postcard on the internet yesterday, and it was described as being a gypsy camp in the woods at Portmeirion, that is incorrect. In the woodland of Portmeirion, there lived for many years a hermit by the name of Uriah Lovall. He was described as being the most courtly and accomplished old hermit of high degree, whom many visitors to Portmeirion remembered with real affection. He lived in the woods in a plaited wigwam. He made his living by weaving baskets, and conversing philosphically by the hour. It is said that he kept his little hid-out neat and tidy, and himself almost dandified in his own handsome person, with his grey curly hair, gold earrings, an yellow silk scarf, and brown moleskin coat.
Clough Williams-Ellis had not counted on a resident hermit, but Uriah Lovell simply arrived and settled in, just as some wild creature might have done, thinking that he might be happy there. And so there he remained for several years, keeping himself to himself, yet friendly to those who crossed his path, and never cadged anything from anyone, yet he accepted any little gift that might be brought to him.
Uriah Lovall was perhaps as happy as any man could possibly be. But alas, he was cruelly run down by a motorcycle, he never fully recovered, and one day he simply crept away - and died.

I'll be seeing you
Posted by David Stimpson at 09:56