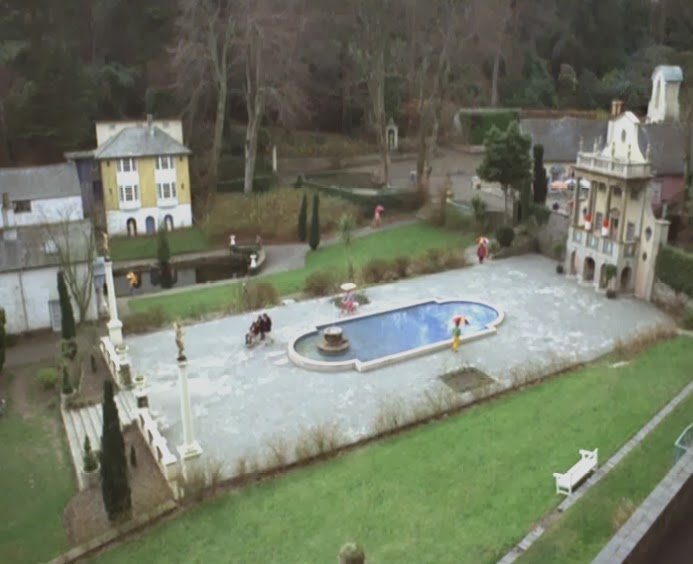 In 'Once Upon A Time' No.6's mind has been regressed to his childhood, and apparently No.2 has spent the night reciting nursery rhymes to the slumbering No.6. With the subject now awake, No.2 asks No.6 if he would like to go walkies. So wash and dress quickly, and No.2 will show him some nice things.
Now I always thought that No.2 would have taken No.6 from his cottage, across the square, across the street, and up the steps to the Green Dome. But apparently not. In the above picture isn't that No.2, with the butler pushing No.6 in a wheelchair? Next is an enlargement of that section of picture.

I can only imagine that while No.6 was washing and dressing No.2 contacted the butler, instructing him to bring a wheelchair to '6 Private.' What happened after that must have been that as a family, No.2 the father, No.6 the son, and the bulter symbolically representing the mother pushing the child's pushchair, as they went on a tour of the Village.
This has to be right, because the next shot we see is this one. 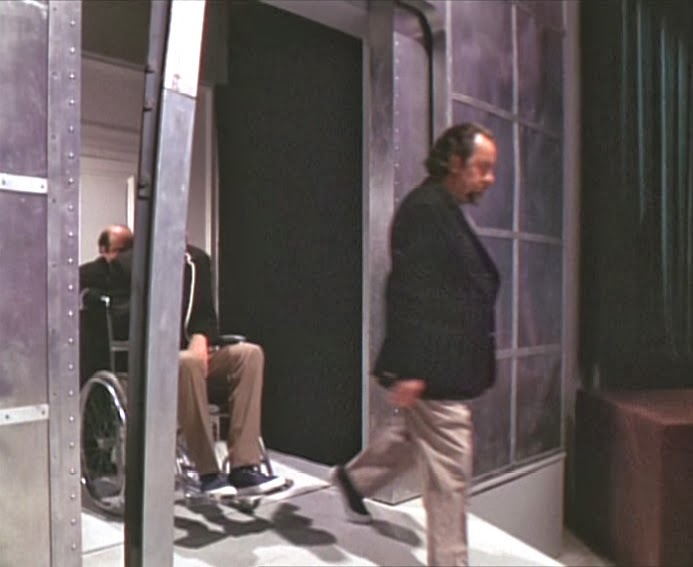 No.2 and No.6 being pushed in a wheelchair by the butler, entering No.2's office!
The short piece of film with the three crossing the central Piazza must have been filmed for 'Once Upon A Time,' although perhaps only two out of the three figures are correct, as Leo McKern never went to Portmeirion during the filming of 'the Prisoner.' In fact that might also not be Angelo Muscat, or Patrick McGoohan for that matter in that shot. What does matter is that the representation by possibly three other individuals filmed in long shot is complete, and works. Mind you the Village is hardly "wheelchair friendly," there are four sets of step they have to go down and up in order to reach the Green Dome, unless they go the long way round!


Be seeing you
Posted by David Stimpson at 08:27