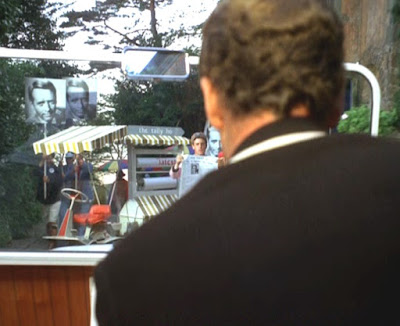 I cannot help but wonder if No.113c blocked the street deliberately with that tractor and Tally Ho dispenser that day. After all, had it not been there, the road would have been clear for Number 6 to drive the Mini-Moke all the way down to the slipway, and onto the beach in an attempt to escape. In the way he had on the day of his arrival in The Village. But then again that would be a repetitive scene, and wouldn’t have been quite the thing.
So the road was blocked, and Number 6 was forced to abandon the taxi and run for it with Number 58 giving chase. Eventually Number 6 did make it to the slipway, but the tide was in, which would have been the same result had the street not been blocked. Number 6 would have been forded to abandon the Mini-Moke at the slip way and take  to the sea by jet boat.
Although in ‘Free For All’ Number 6 attempts to escape by sea, taking on the two motor mechanics aboard the boat. There is a
parallel between it, and the scene in ‘Arrival,’ when Number 6 takes on two Guardians, climbing aboard the Mini-Moke, and attempting to escape by driving out along the beach. The parallel is completed when in both scenes Number 6 has to abandon the Mini-Moke and boat because of an imminent by the white membranic Guardian.
I suppose one could argue that that place, in the street, is Number 113c’s pitch, where he stands every day to sell copies of The Tally Ho. If it is, then he daily blocks the thoroughfare………….Just a minute, it was only a few moments ago that Number 6 was in his cottage with Number 58 who had just brought him his breakfast. So as we see the episode, this is on the morning of the second day of ‘Free For All.’ So how come Number 113c is still selling copies of yesterdays Tally Ho?