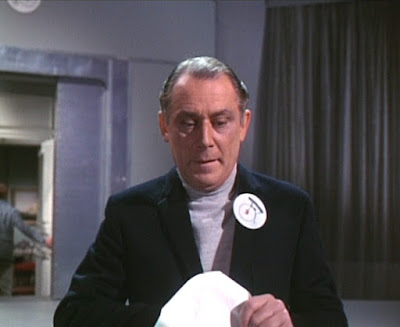 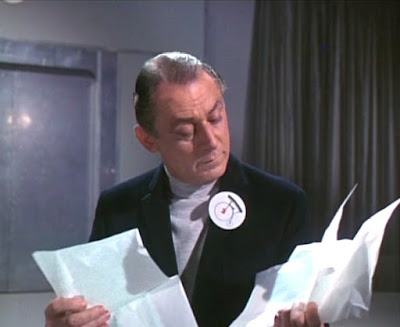 In ‘Hammer Into Anvil,’ after Number 2 and Number 14 have retrieved the large white envelope from the main cabin of the Stone Boat, left there by Number 6 only a few minutes before.
Upon returning to his office Number 2 is already beginning to tear open the envelope, even before he’s hardly put a foot into his office. Number 14 is present at this time, and is probably as eager to learn what the envelope contains as Number 2 is. However………
“I shan’t need you any more Fourteen, you can go.”
“But I thought…”
“Don’t……..just obey orders.
“Yes sir.”
Number 2 puts his hand into the envelope. But he pauses, there is an expression of expectation, perhaps anticipation on his face, as he is about to discover what the envelope contains………blank sheets of paper! In fact four blank sheets of foolscap paper. He telephones the laboratory, Number 253 answers the telephone and is summoned to Number 2’s office. Upon his arrival Number 2 hands Number 253 the blank sheets of paper. He wants them tested immediately. The laboratory technician looks puzzled.
“For what?”
“Anything. Words, figures, whatever’s written on them.”
There doesn’t appear to be anything written on them, but Number 2 is not a man to be argued with! He tells Number 253 that there is, a message of some kind.
“Try everything. X-ray, infra-red, what are you staring at?”
“Nothing.”
“Then get on with it!” Number 2 barks out.
Two laboratory technicians work together in order to establish what is written on the four sheets of foolscap paper. They try everything, but to no avail, the result of all the tests is negative. Number 242 suggests that they put the sheets of paper through the tests again. But there’s no point, they have tried everything, Number 2 isn’t going to like this.
Back in Number’s office.
“Well?”
“I’m sorry sir, but there’s nothing” Number 253 reports.
“Nothing, nothing at all?”
“No sir. They’re just blank sheets of paper.”
Number 2 snatches the sheets of paper out of 253’s hands “They can’t be! Why should he hide blank sheets of paper in the Stone Boat, or are you hiding something?”
“What do you mean sir?”
“I mean was there a message here and you’re not telling me.”
“Why should I do that sir?”
“Perhaps you’re in with him!”
“In with whom?”
“Six, Number Six.”
Number 253 looks puzzled.
“Oh you don’t know what I’m talking about, get out!”

Number 6 pays a call on Number 2, after he had received a visit from Number 14 telling him that he’s finished, and accusing Number 6 of putting the poison in.
Number 2 asks Number 6 what he’s doing there, he’s come to keep him company. He’s heard that all of Number 2’s friends have deserted him {not that he had many friends to begin with} that he can’t trust anyone any more {well he never did} pity. All that power at Number 2’s disposal, and yet there he is all alone. In fact Number 2 has never felt so alone as he grips hard onto the Penny Farthing seemingly for comfort.
Number 2 asks what Number 6 wants? He’s come to talk, to listen. But Number 2 has nothing to say. But that’s not like the old Number 2, where is the strong man, the hammer. You have to be hammer or anvil, Number 2 saw himself as the hammer, but hammers break more than anvils. Number 2 claimed to know who the Prisoner is, who freely admits that he’s Number 6 {he can’t be feeling well} but not in Number 2’s eyes, he’s D6, who was sent to The Village by their masters to spy on Number 2. He had been onto him right from the very beginning, he knew what D6 had been doing, so he can stop acting now. All those messages he sent, all the people he recruited, Number 2 knew Number 6 was a plant, he didn’t fool him. {Number 2 fooled me almost 50 years ago, because I thought he had got it right, that Number 6 had been a plant} the only trouble was, Number 2 fooled himself! Supposing for a moment that Number 2 had been right, that Number 6 had been planted in The Village by XO4, in order to check on Village security, to check on Number 2. But then Number 2’s first duty as a loyal citizen should have been not to interfere, but he did interfere, he admitted that much himself. There’s a name for that, sabotage! Who is Number 2 working for? For the power behind The Village, he protests. But he could be working for the enemy, or he could simply be a blunderer who has lost his head, either way Number 2 had failed! And they do not like failure here {that’s funny, I thought they never failed}. Number 2 saw it as Number 6 having destroyed him, but no, Number 2 destroyed himself, it was a character flaw, a weak link in the chain of command waiting to be broken. And any chain of command is only as strong as its weakest link. Number 2 begs Number 6 not to report him {I should imagine that Number 1 knows already considering that first scene in Number 2’s office} but Number 2 is to report himself. Had Number 6 picked up that oversized curved red telephone and reported Number 2 himself that game he had been playing would have been up for Number 6. Hence Number 2 having to report a breakdown in control to Number 1, breakdown being the optimum word. 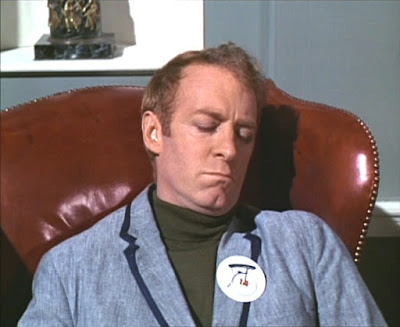 There he is, Number 14 dozing in an armchair in the foyer of the Green Dome. As soon as he hears the pair of steel doors slide open he jumps to his feet, and comes to the attention position as he straightens his jacket, giving Number 2 the impression that he’s been standing like that all the time! 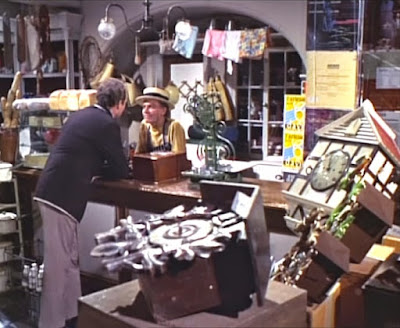 In 'Hammer Into Anvil' when Number 6 goes to the General Store to buy a small notebook, seeing as I have a fascination with all things stationary myself.
“Good day sir.”
“I'd err like a small notebook.”
“Very good sir.”
“There's a nice little selection there sir.”
“That's a nice one, I think I'll have that.”
“Will that be all sir?”
“No. I think I'd like mmm..one of these” Number says walking over to the cuckoo clocks.
“Ah yes sir. Yes sir very good value, special import. What about this type?”
“No. I'll have this one.”
Number 6 has dallied with the Shopkeeper-Number 112 before, and now does so again when he buys a cuckoo clock. He doesn't want the one the Shopkeeper suggested, who told Number 2 that he was looking for a specific one. Not so much a specific one, but a specific box!
Having paid for his purchases Number 6 leaves the General Store and it doesn't take the Shopkeeper long before he's on the telephone to Number 2 in order to report Number 6's unusual activity again. He wasted Number 2's time the first time he reported Number 6's unusual activity, and now he was about to do it again. But then Number 2 only had himself to blame, asking for any unusual activity on the part of Number 6, to him personally. He was just asking for trouble!
Finally I like the way one of the cuckoo clocks is "cuckooing" as Number 6 enters the General Store, in a way it seems suggestive. 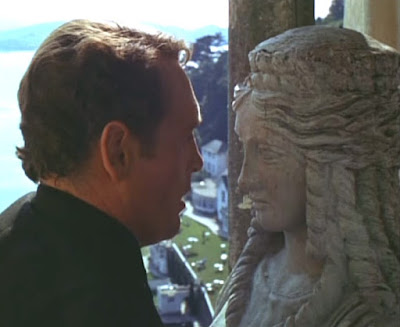 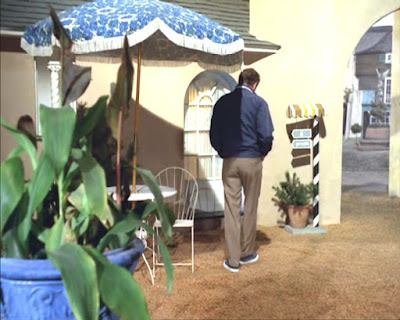 Thankfully for him the chimes of Big Ben are an hour out! He leaves what he thought was the Colonel's office in London, but he has been in The Village all the time. He steps outside and walks towards the Recreation Hall, where Number 2 and Fotheringay are talking together. Number 2 congratulates him and tells Fotheringay to get back to London before any embarrassing questions are asked. Fotheringay asks what’s him next assignment? The Colonel will give him his order when he returns. Nadia then appears, Number 6 stands looking up at her, shoe looking down at him…. “Be seeing you.”
As Number 6 walks back to his cottage there’s an announcement “Good evening citizens, your local Council wishes to announce another exciting competition. The subject this time… seascapes.” To me that sound like rubbing salt into the wound!
The fact that 4 of these scenes come from ‘Hammer Into Anvil’ is just the way it turned out. I could so easily have simply just selected 6 scenes from my favourite episode ‘Arrival,’ or my second favourite episode ‘Checkmate,’ but that would have been too easy. If you the reader had to choose your own favourite episodes, I wonder which they might be?