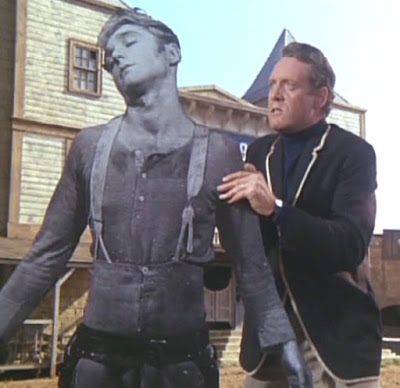 The Man With No Name having buried Cathy in Boot Hill, returns to the Jailhouse to get his gun. Then he steps out into the street where the Kid is waiting. The two men face each other…. they draw The Kid, puts his gun back into its holster, falls, and lies dead in the street! The Man With No Name walks over to the body, passed the body and goes into the Silver Dollar Saloon for a drink.
The Kid was the fastest the Judge has ever seen, will ever see, The Man With No Name has just resigned….again, he’s very good at doing that, he can’t seem to stick at anything for long! But the Judge doesn’t accept the Sheriff’s resignation, he can’t resign, not while the Judge has got Cathy. But he hasn’t got Cathy, she’s dead and buried in Boot Hill! Soon there’ll be three more, the Judge’s gunslingers who lie dead for a start, and the Man With No Name shot dead by the Judge who’s quick on the draw with his derringer.
It’s a rude awakening for Number 6 who wants to strangle the Judge with his bare hands, only to discover he’s a cardboard cut-out, and that goes for the Kid as well! So why are those two cardboard cut-outs in black and white when everything else, including the cut-out of the horse is in colour? I’ll leave you to think about that one!