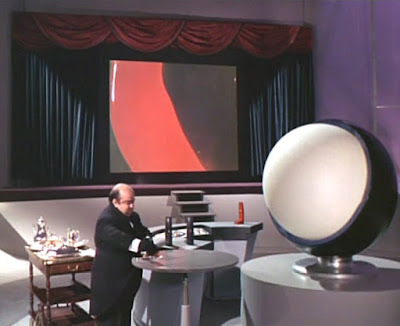 We remember Number 14 the chess champion of ‘Checkmate, who ignored the white membranic Guardian when it passed by that time. Ignored by the one, and possibly by the other because there was no sign of fear. And then in ‘Once Upon A Time,’ our diminutive friend the Butler brings in Number 2’s breakfast. He presses a button on the control panel of the desk and begins to lay out the breakfast as the black spherical chair rises up through the floor. But it’s not Number 2 in that chair but the Guardian, who appears to think it’s the boss! As for the Butler he pays no heed to the Guardian as he’s probably seen it all before, therefore nothing surprises him. He probably thinks the Guardian as Number 2 couldn’t possibly do any worse than any of its predecessors! As for the Guardian the Butler shows no fear towards it, so it ignores him as it had done Number 14. Mind you it’s going to be interesting to see how the Guardian eats that breakfast!