A Favourite Scene In It’s Your funeral 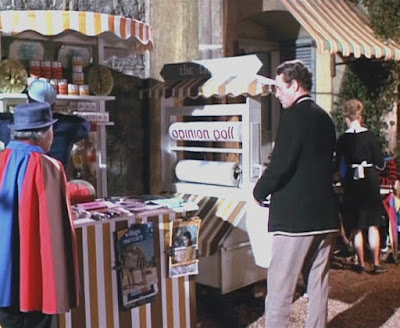 Number 6 approaches the kiosk, he is handed a copy of The Tally Ho, and picks up a bar of soap. I wonder what the headline of the broadsheet is? This is one edition of The Tally Ho when we do not actually see the front page. Perhaps the leading story is about Appreciation Day, after all that’s the running theme throughout this episode, more or less. But it is clearly impossible to say, all that can be said is, it doesn’t have the date Feb10th.
There’s a woman at the kiosk, Number 36, I wonder if Number 6 recognizes her as Mrs. Butterworth’s housemaid Martha? Of course Number 36 could be a completely different character altogether, played by Grace Arnold. But fictionally speaking I like to think of Number 36 as being Martha who was left behind by Mrs. Butterworth when she left The Village. I’m sure Martha was a loyal and devoted servant to Mrs. Butterworth, but the chance could not be taken. Can’t have all and sundry wandering about free with knowledge of The Village, just won’t do at all!
So there’s Number 36 trying to buy a bag of sweets, because she can’t go a day without them, meaning either she has a sweet tooth or she has become addicted to sugar. So feeling sorry for her, when Number 6 pays for The Tally Ho and a bar of soap he also buys 36 a bag of sweets, so apparently there’s no hard feelings on the part of Number 6. Because the last time he saw Martha she looked own her nose at him, that raggedy man in ‘Many Happy Returns. She must have taken Number 6 for a vagrant!
Opinion Poll, I didn’t think citizens and citizenesses were allowed opinions! I’ve often wondered why The Tally Ho dispenser still has the bulletin ‘opinion poll’ from when it was last used during the local election in ‘Free For All.’ You’d have thought they would have changed that. And the dispenser is not used in the previous episode ‘Hammer Into Anvil,’ Number 6 buys copies of The Tally Ho from the General Store and a kiosk. And of course there are copies of ‘Village Mercury’ and ‘Village Journal’ for sale. There is a picture of what looks like a man and a woman together on a beach on one magazine, and a woman with dark auburn hair standing.. Anyway the two pictures are too indistinct to be identified, as with the headline of The Tally HO Number 6 buys. But it’s not the same Tally Ho used in both ‘A B and C’ and ‘The Schizoid Man’ as there’s no date, at least that much can be said.
So Number 6 buys Number 36 a bag of sweets, well candy, as Number 6 said, but that’s American for you, they call sweets candy. And that’s not the first Americanism he’s used within the series and it won’t be the last!