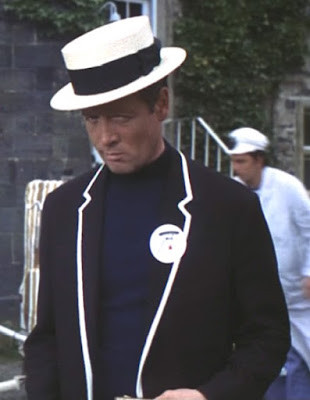 Funny, it’s just like being back at school isn’t it Number 6 don’t you think? Perhaps you wouldn’t. Anyway that was the last time you wore a piped blazer, as Captain of the school boxing team. And as a fifth former you were allowed to wear a straw boater, not like the one you’re wearing at the moment admittedly. And you’ve been given a number, you should be used to that, even as a schoolboy you had your own number. But perhaps as you will be now, you were known then more by your school number than your name. Perhaps that’s why you toss that badge into the back of the taxi, along with the straw boater, that they remind you too much of your school days. But you retain the blazer, well a gentleman must have a jacket, if not a hat! Anyway there you go, a new suit of clothes, a new identity, and a free ride home, home being where the heart is, even if that’s not here in The Village. Anyway that cannot be helped seeing as the taxi is only a local service!