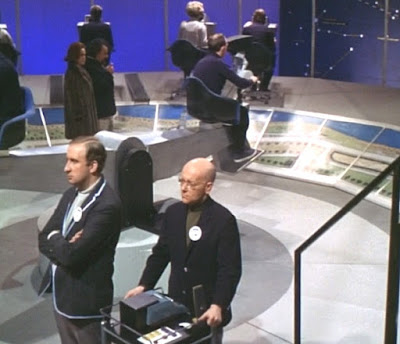 “You shouldn’t feel too bad about it.”
“It’s alright for you!”
“Is it?”
“You’re your own boss.”
“Am I? Yes I suppose I am.”
“I was my own boss as manager of the Labour Exchange.”
“So what happened?”
“Well really there wasn’t that much for me to do, Number Two reported me for playing with……..with a children’s construction set.”
“We don’t get time for that sort of thing here in the Control Room.”
“They suggested I take a side-ways promotion, and that I was in the best position to find myself one.”
“So?”
“I became assistant to Number 2.”
“That was a good sideways promotion.”
“Not really, there wasn’t much for me to do.”
“And?”
“All I did was suggest that there were methods we hadn’t used against Number Six, and the next think I know is, I’m taking another side-ways promotion to the Control Room!”
“Ah, that was your mistake you see. They think very highly of Number Six.”
“So I found out. And here I am.”
“My assistant.”
“Again with nothing much to do!”
“You could make yourself useful by making the tea.”
“Now I’m nothing more than a glorified tea-boy!”
“The trouble with you is, you don’t like to have a lot of work to do. It’s the authority you’re missing!”
“See that woman and Number Two together over there, I should be with them.”
“Instead of standing here with me with your arms folded!”
“Well yes.”
“You’re feeling left out in the cold! She’s not like you, she doesn’t mind getting her hands dirty!”
“Tea is it?”
“Milk and two sugars. And don’t forget the biscuits.”
“Biscuits?”
“Yes, the proper ones, the ones with the cream inside.”