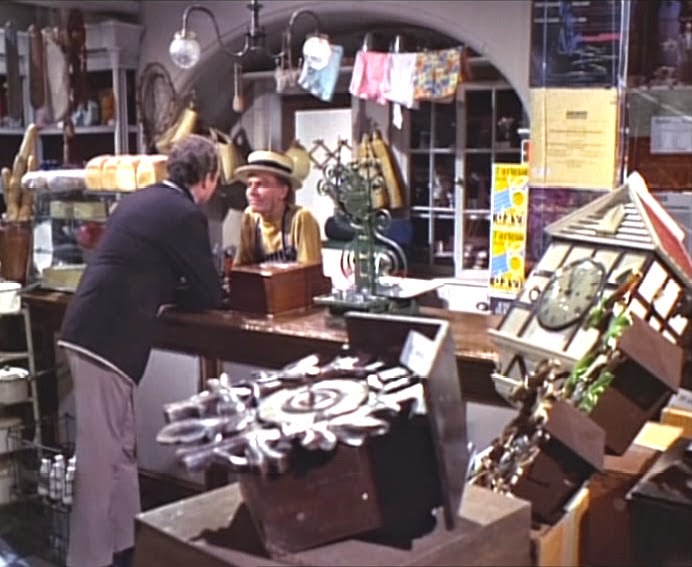 In 'Hammer Into Anvil' when Number 6 goes to the General Store to buy a small notebook, seeing as I have a fascination with all things stationary myself.
"Good day sir."
" I'd err like a small notebook."
"Very good sir."
"There's a nice little selection there sir."
"That's a nice one, I think I'll have that."
"Will that be all sir?
"No. I think I'd like mmm..one of these" Number says walking over to the cuckoo clocks.
"Ah yes sir. Yes sir very good value, special import. What about this type?"
"No. I'll have this one."
Number 6 has dallied with the Shopkeeper-Number 112 before, and now does so again when he buys a cuckoo clock. He doesn't want the one the Shopkeeper suggested, who told Number 2 that he was looking for a specific one. Not so much a specific one, but a specific box!
Having paid for his purchases Number 6 leaves the General Store and it doesn't take the Shopkeeper long before he's on the telephone to Number 2 in order to report Number 6's unusual activity again. He wasted Number 2's time the first time he reported Number 6's unusual activity, and now he was about to do it again. But then Number 2 only had himself to blame, asking for any unusual activity on the part of Number 6, to him personally. He was just asking for trouble!
Finally I like the way one of the cuckoo clocks is "cuckooing" as Number 6 enters the General Store, in a way it seems suggestive.