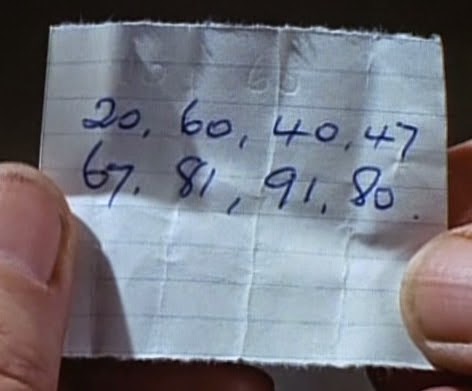 It would appear that this was not the only code written by Number 6, which was attached to the leg of a pigeon in 'Hammer Into Anvil.' Observe the indentations in the paper made by writing on the previous page in Number 6s notebook. The numbers look like 26 and 66. Originally the code was to have been in letters and not numbers, in other words a substitute code. It was also written in Patrick McGoohan's own hand. The trouble with breaking a code is, its a finite problem, especially if you don't know the basis of the code, or lack the code book itself. With a substitute code the letter which is used the most in the code must be "e" as "e" is the most frequently used letter of the alphabet. In this case its three letters S, R and P! But of course this code may be more complicated than that, as its possible that each letter stands for a word, there is simply no-way of knowing.

BCNU
Posted by David Stimpson at 08:38