Who Is Fotheringay Speaking To? 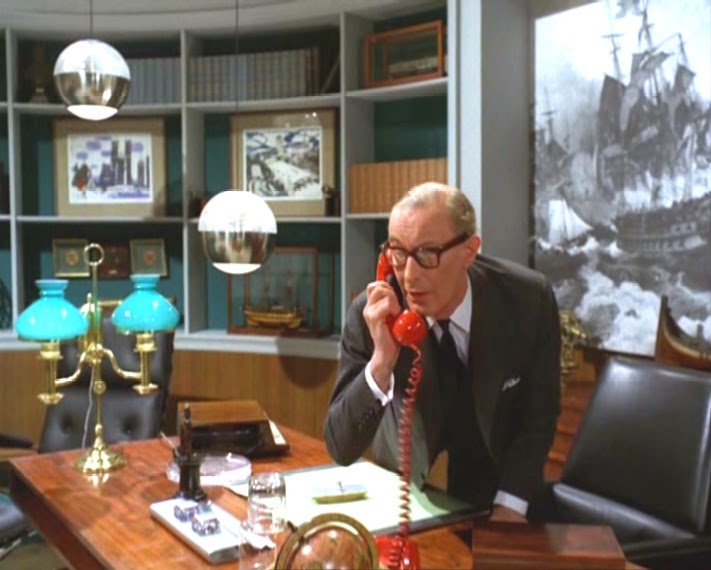 Who is Fotheringay talking to on the telephone? He said he had seen a copy of the deciphered message {the Prisoner's delivery note} which Number 6 had written in the cave and had given to Karel for transmission to London. Did that include the radio transmission frequency? It has been suggested that he's talking to Karel, who would have had a telephone or radio transmitter in the cave, otherwise the Supervisor wouldn't have been able to contact Post 5 which was Karel's real identity, to tell him that Number 6 and Nadia were on their way to him.
The elaborate plan which takes place during 'The Chimes of Big Ben' can only work properly the one time, after that it is perfectly clear to the television viewer that Nadia's contact man Karel is actually Post Five. That the 12 hour journey to London, parts of which are shown for the benefit of the viewer, never actually took place. The crate containing Number 6 and Nadia was put on a boat, perhaps M.S. Polotska, and taken back to The Village. And the physically written coded message would have been given to the Captain of the vessel, who would have taken it back with the crate to The Village. The message would have then been deciphered in the Computer Room. Fotheringay might well have seen a copy of the deciphered message, but it was never transmitted to London seeing as Fotheringay isn't in London, he's in The Village. So the question is, who is Fotheringay talking to on The Telephone? Seeing as he's in a reproduction of the Colonel's office, then Fotheringay is there simply to help set the scene for the arrival of his ex-colleague, window dressing if you like. To make it more plausible to Number 6 that he has arrived in an office in London, which is where he thinks he's supposed to be. It's quite on the cards that Fotheringay isn't speaking to anyone! That he speaks into the telephone simply for the benefit of the television viewer, in helping to maintain the illusion!