What's That Number 6 Up To? 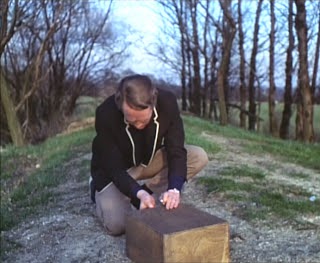 He's somewhere out in the countryside, well beyond the Mangrove walk. What’s more he’s got that wooden box he bought with the Cuckoo clock. The box he used to catch a pigeon with the aid of a half eaten ham sandwich. So what does he want the pigeon for? I never took Number 6 for a pigeon fancier! 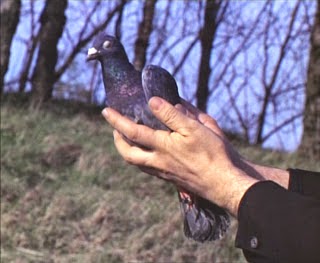 Number 6 takes the note book he purchased from the General store and writes down a message in code. A code originally was to have been a simple substitution code, but for some reason was changed to numbers code. Number 6 then attaches the message to one of the pigeon’s legs via the ring. The new Supervisor Number 60 panicked when he saw Number 6 sending a message. If he thought that the pigeon is a homing pigeon, where did he think the pigeon was homing to? If Number 60 thought about it for a moment, instead of panicking the way he did, by having the beam at "hellfire" strength to bring the pigeon down. Mind you that would have blown the pigeon to smithereens, and the message with it! He’d have realised that the “homing” pigeon would have eventually returned to The Village. Like Number 6, the pigeon had no other place to go! I just wonder how long it took to find the pigeon, after it had been stunned by the beam?