Time And Tides Wait For No Man! by our own reporter 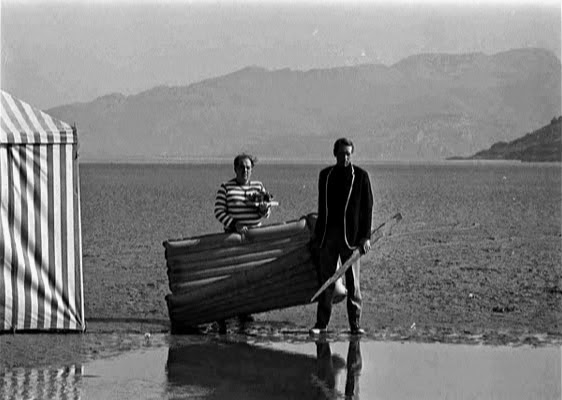 The editor said to me, "Go forth my son and seek out a story, one that tells of the human side to life here in The Village." Well I was really struggling to find such a story. There was Number 2's cat getting stuck up a tree, Number 8's heart breaking story of a "woman spurned." There have been a number of thefts, a surveillance camera. A telephone from a kiosk, as well as a screwdriver and electrical equipment from an electrics truck. Not to mention an aerial having been broken off one of the taxis. All mundane and trivial acts in my book, which left me completely uninspired. So I decided to take a slow walk along the beach and think.

It was just as I was making my way through a small camp of bathing tents, and it was from one of these bathing tents that No.6 and The Rook suddenly emerged, carrying between them a pair of rubber lios, a length of wood, and a radio set! This was my story! Luckily I had my camera with me to take this photograph. As it turned out, Number 6 had come up with a daring escape plan employing a small group of "reliable" men. The Rook was to have been cast adrift aboard the two rubber lilos to send out a distress signal using the radio transmitter he had built, this in order to bring a boat in-shore, to rescue them. This while Number 6 and the rest of his "reliable" men were to take charge of Number 2 in his office in his residence of the Green Dome. The only trouble with this escape plan, is that it was badly timed. Because as Number 6 and the Rook emerged together from their bathing tent, they did so only to discover that the tide was out!
This for me is the perfect "human story," that such care was taken by Number 6 to discover his "reliable" men, to go about stealing pieces of Village equipment with the Rook in order to make a radio transmitter. It was a good plan, but Number 6 couldn't think of everything. It's just a pity he didn't think to check the times of the tides!

Our own reporter
Posted by David Stimpson at 08:22