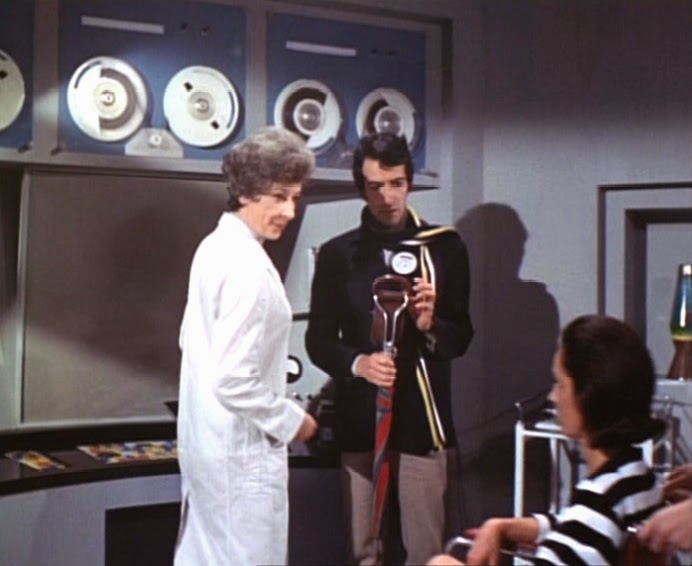 "What's this?"
I've always thought that Number 2 says that in somewhat of an unfeeling way when Number 8 is wheeled into the Observation Room. The doctor explains to Number 2 that this is a new experiment. If it works it will prove invaluable to Number 2.
"What exactly is the experiment?"
“A development on research using Dolphins, as a means of submarine detection, they planted transistors in their brains.”
This doctor hasn’t got that far with humans, but the doctor thinks Number 2 may find this effective for their purposes. A reaction transmitter hidden in a locket which Number 8 will wear all the time. Poor Number 8, she has been hypnotised into thinking that she is in love with Number 6, and he with her. The use of Number 8 like this, and the fact that she told Number 6 that she has often helped others with their plans to escape, plans which of course all failed, makes me wonder how many other times she has been used in this particular way.
Number 2 finds it all very ingenious. The fact that when Number 6 is out of Number 8’s sight she’ll be sighing. When she sees him her pulses will quicken, and if she thinks she’s going to lose him, if he attempts to escape, she’ll be frantic. And her overwhelming emotion will send an alarm to Control.
“Good!” says Number 2 and leaves the Observation Room.
The way Number 2 says “Good!” it always makes me think that he’s not at all he bothered about it. It seems that as long as this new device works, he’s unconcerned about it. This Number 2 strikes me as being an able administrator, and happy to let others get their hands dirty. With ‘Checkmate’ the only failure for Number 2 and The Village is the experiment employing Number 8 and the reaction transmitter. But even that worked for a while, until Number 6 discovered it by accident.

Be seeing you
Posted by David Stimpson at 09:19