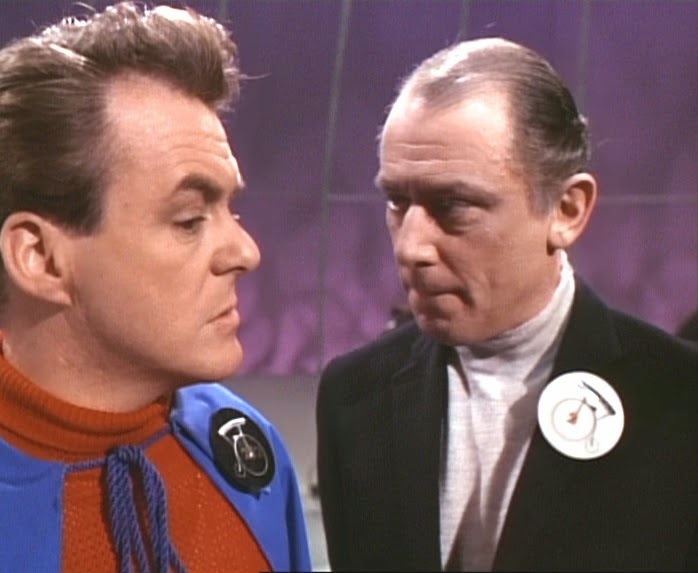 Number 202 is the leader of the Brass Band which holds its regular Brass Band concerts on the Bandstand opposite the chess lawn. On this particular day when Number 6 was taking his daily stroll around The Village, he just happened to find himself in the vicinity of the Bandstand. Mounting the steps and approaching the Bandstand just as the Band was coming to the end of one set, Number 6 spoke with the Band leader for a few seconds and then walked away. This resulted in the following interview with Number 202.
"A request you say?"
"Yes sir. That's all, he asked me to play the Farandole from L'Arlesienne suit" the Band leader confirmed.
"What else?" Number 2 asked, sure that there was more to this than met the eye.
"I don't understand sir."
"What else did he say?"
"Nothing sir."
"Nothing" Number 2 repeated, linking his hands behind his back and pacing up and down the floor of his office "Number Six just asked you to play a tune... and then walked away."
"Did he sir? I didn't notice" the innocent band leader replied.
"Does that make any sense to you?"
"No sir."
"No, it doesn't, does it" Number 2 confirmed "I'll ask you once again... Did Number Six say anything else.... about me for example?"
"About you sir?" Number 202 asked, this time answering with a question of his own.
"Well did he?"
"No sir" came the answer.
Number 2 thought the band leader might have forgotten "Perhaps you've forgotten. Try to remember!"
But after a moments thought he found he hadn't "He didn't sir."
At this point Number 2 began to lose the plot "You're lying aren't you!" he screams. "There's something going on!"
But of course the band leader wasn't lying, and there wasn't anything going on.
"I don't know what you mean sir."
"I don't know what you mean sir. I'm as much in the dark as you are" mocks Number 2
"You're all lying! Its a plot! Going behind my back. Who do they think they're dealing with? Pigmies!"
By this time Number 2 had completely lost it. The innocent Number 202 wondered what it had all been about, and he was the next to be added to the growing list of citizens who were voicing their doubts about this current Number 2. There had already been the two laboratory assistants Number's 242 and 243, not to mention the head of psychiatrics-Number 249, and these numbers would surely be added to as the episode progresses!
By this time No.2 had lost all patience with the Band leader-Number 202 and indicated with sweeping gestures of his arm to leave.
"Oh get out, get OUT!"