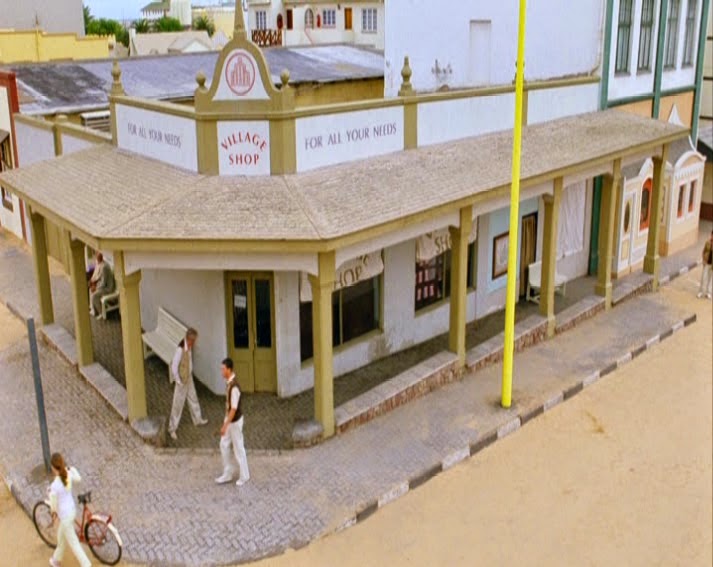 Here we see Two about to enter the Village Shop. Yet if you look closely you will see that Two crosses the path of someone dressed identically to him, this is a Two Impersonator in fact. Two impersonators may look like Two, but they are not Two, they are a danger to The Village!
A favourite moment in THEPRIS6NER is when Six wakes up somewhere in the desert. Because I'd been waiting for this reinterpretation of ‘the Prisoner’ for so long since the completion of its production, teased by ITV’s advertisements for the forthcoming series, which was advertised in the winter of 2009, but had to wait until the spring of 2010. And I'm pleased to say that I was one of the band of few who really enjoyed the series, and who still enjoys the series.
In the final episode of ‘Checkmate’ Six is a dying man - 313 examines Six and discovers that Six is dying. 147 takes Six to a man who might be able to cure him. A Village prophet tells Six that deliverance is coming, they just need to wait. I wonder what else that Village prophet might be able to tell us if we were able to ask!
In The Village "There is life, or no life" as Two puts it. So why does Six choose death, but then why is he afraid to die? Village Death is escape, if only Six could see it, if only he had the faith that Two had. But then Two had prior knowledge, otherwise he might have thought twice before he pulled that pin of the hand grenade.
Mister Curtis returned to his wife Helen in New York, he tells her "Don't look back." but how possible is that? For Curtis The Village had been his life, everything he believed in was in The Village. Could Curtis really walk away as easily as that and forget The Village forever? As for his wife Helen, she has lost a son. It doesn't matter that 11-12 never really existed, he did in Helen's mind, and that was enough for her. If you ask me Curtis and his wife, are two more broken people in New York who are in need of being made better, I wonder..........perhaps Six and 313 will bring them back to The Village to be made better people!
At the beginning of ‘Checkmate’ a bus travels along the desert road on its way to The Village. Fair enough I suppose, but where has this bus travelled from in order to arrive in The Village, New York perhaps? However when the Prisoner first met Two in ‘Arrival,’ Two told him that there is no New York, there is only The Village. {Originally this made me think that there had been a global catastrophe, seeing as there was only The Village with only desert for hundreds, perhaps thousands of miles in every direction}. The bus brings "newcomers" to The Village where they get off the buss, only the newcomers to The Village got on the bus in The Village in the first place!
I was pleased to see that a number of citizens, including the doctor-313 wear piped jackets, modern-day piped jackets. Only 93 wears the former style of piped jacket of the former Village, but even then it's modern, but the only citizen to wear such a piped jacket, which gives 93 the appearance of having been brought from The village, to The Village!
‘Schizoid’ is not simply about good and evil, there's the complicated natures in all of us, we've all got our problems, and some more than most, and that includes313 as her other self, Sarah, begins to impinge on her life in The Village more and more. Doctor heal thyself! I suspect most of us could do with a fortnights leave there!
As for Six, not only is he in a battle with The Village and Two, but also with himself. Part of Six's personality has been released, his anger, and should Six give into his anger, which is what Two wants Six to do, to try and kill him in fact, and if Six cannot control his desires Two will then control Six. Which incidentally is what Number 2 was trying to do with Number 6 in ‘Once Upon A Time’ of the original series.
‘Schizoid’ is also about identity, about who we are. There is always a part of us that no-one truly knows, we hide it away in a box, anger, passion, jealously, whatever it is. But then just once in a while our other-self gets let out of the box, just like 313's abused self, Sarah, who she doesn’t want anyone to see, or go back to.
For Six his is the more thinking element, 2 times 6 is the passionate side to his nature. The sex drive, anger and rage, which is good to have because without our passionate nature what are were? And sometimes you have to get angry, to exert ones rage at something, someone. But sometimes it can also hurt yourself.
As for Two, he's undone by the guilt, the shamefulness of what he's done to his own wife, and that is shown in his Un-Two nature. The Village only exists in the subconscious mind of Two's wife Helen-M2. Curtis sacrificed his wife for what Two thinks is the greater good. But Two loves his wife desperately, and desperately at times wants to communicate with her, which endangers everything he believes in - The Village. When Two yields to his other nature, becomes Un-Two, he is experiencing The Village at ground roots level.