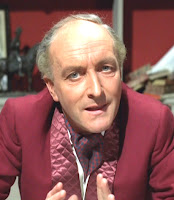 My lecture today ladies and gentlemen concerns technology and transport. One piece of equipment used as a prop is the Olivetti Summa Prima adding machine {dual decimal} which is used by the doctor in Arrival, and by the Supervisor in the Control Room, during the episode 'Checkmate.'
One other machine which particularly springs to mind is the Creed teleprinter used in ‘Dance of the Dead,’ which Number Six fails to sabotage in the closing moments of the episode. This effect was achieved by lacing an unconnected loom of wires and terminal blocks across the access door to the space below the printer, where it's roll of paper
was housed, suspended from chains attached to each end of a bar that ran through its centre core, there being no electrical connection in this part of the unit.
All the electrician had to do was isolate the mains switch whilst Number Six was ripping out the wiring and paper, and restore power after the delivery of Number Two's immortal line "Then how very uncomfortable for you old chap!"
During 'The Chimes of Big Ben' Number 2 records a report on number 6 upon a small recoding device, which contains, either two tiny spools and magnetic tape. Or it is possible that it is an early form of a Digital recording device with a restricted recording time of say 40 seconds.
Gas guns containing nerve gas “one squirt you’re paralyzed, two squirts you dead.”  Which in turn means either the development of nerve gas, or it’s acquisition from one source of supply or anther.
Inside cottages and various buildings of the village there are internal speakers  have no wires  no Arial and
no on/off switch. This then is the village advancement in the technology of wireless communication. Where you
have a method of data transport, wireless technology appears very simple to wired technology. You have a
piece of hardware, a method of transmission , and communications on both ends that transform data.
You can’t move you laptop 15 feet from the wall jack when depending on a 10-feet cable. Similarly, you
can’t go out for a jog and expect your in-home cordless telephone to keep a connection five miles away from
its receiver. This in the same way that in the evening of The Chimes of Big Ben No.6 could not have taken
that speaker outside if it were on the end of a cable. Which means all building in the village are “wireless ready.”
The methods of connection and ranges of services available vary in wireless technology. Different types of
wireless solutions can communicate ten feet, ten miles, or with  satellite in orbit.
When on the morning of The Chimes of Big Ben No.6 irritated by the programme of early morning music
placed his speaker in the refrigerator. Thus rendering silence to his cottage, the refrigerator had effectively cut
the speaker off from receiving its wireless signal.

Have you ever been in and taken a ride on the {Associated Equipment Company} Routemaster bus? Like the one on route 59 which Number Six and the chase over for example. This is the only tangible indication that the closing scenes of the final episode were filmed on a Sunday, as route 59 ran only on that day of the week, the weekday equivalent being numbered
59A!

The Professor
Posted by David Stimpson at 08:35