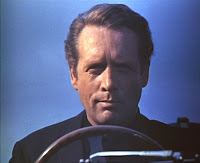 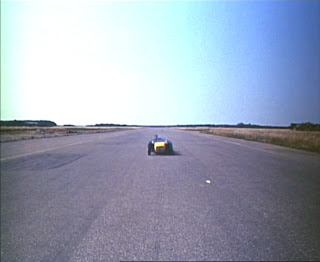 Fall Out Mister McGoohan!
The two frames of film, which look as though they were taken from the opening sequence to Arrival, but were in fact taken from the end of Fall Out, and many might say it's the same difference. But the way I look at it is this, it appears to me that the man sat behind the wheel of his Lotus 7, one Patrick McGoohan, is speeding away from everything, and everybody, as if he cannot wait to leave the whole venture behind him. And at the end of the day, who could have blamed him!

No.7's It Doesn't Really Mean Anything!
"Allegorical" The trouble with the use of this word is just the opposite, it could mean absolutely anything at all! And since the first time Patrick McGoohan first used to describe Fall Out as being an allegorical ending to an enigmatic series, fnas immediately jumped on the band-wagon. and from that point it as all "me allegorical!"
Using the allegorical, meant that Patrick McGoohan could get away with anything as far as the prisoner went!

No.7 {who doesn't exist in the village!}

No.6 Settles Down!
No.6 has always been rebellious since his arrival here in the Village. He's asked questions, refused to settle down, failed to accept his number, and tried to escape on more than one occasion. But if there's one thing that can be relied upon with our friend No.6, it's dependability, and predictability. Because since when has No.6 taken to wearing a cream piped blazer with black piping? More than that, since when has No.6 taken to wearing his badge, a badge which he took off the lapel of his blazer upon being discharged from the hospital the day after his arrival here, and which he has flatly refused to wear, or respond to his number!!!!
What's more when I asked No.6 for an interview he said call round to 6 Private any time. Well, the last time anyone tried to interview No.6, No.113 had to write his own interview about him. Either No.6 has had a change of heart, or a change of mind, because he seems to be settling down quite nicely. He's not caused any trouble, not upset anyone, not tried to escape, and has completely stopped poking his nose in where it isn't wanted. In fact No.6 is turning into something of a model citizen, because gone is his rebellious nature! This is not like our No.6 at all, if indeed this is No.6. It's almost as if he's had a change of character, he seems too nice.