Caught In the Spotlight! 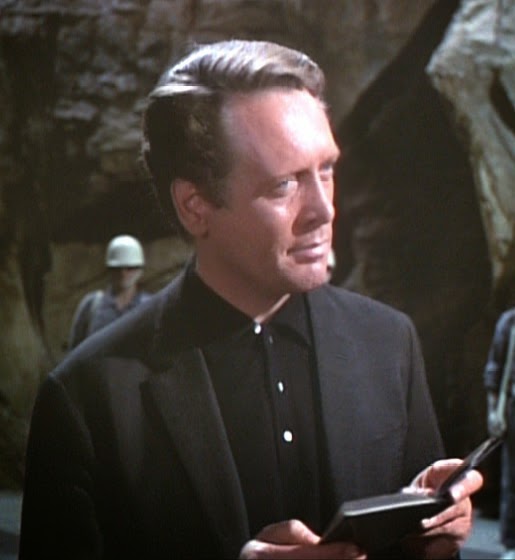 The spotlight is more often than not upon the Prisoner-No.6, seen here as himself dressed in his own clothes. Well he's happier that way it seems. There is much to this man that is an enigma. Even as a child there was something in his brain which was a puzzlement! But at least we did learn one thing, the reason behind his act of resignation - that is was a matter of conscience, as well as for peace of mind because too many people know too much. He certainly knew too much about No.2 and told him so - to his face and saw him as an enemy at the same time!
The Prisoner was originally brought to The Village because he had resigned from his highly secret, and confidential job, or was he? Yes, No.2 wanted to know why No.6 had resigned, and yet as he once said "If he will only tell us why he resigned, all the rest would follow." So the reason why No.6 resigned was really only a starting point from which to gain all the other important knowledge inside his head, to be extracted rather than protected!
Whilst here No.6 is not induced into taking up a working position when at the Labour Exchange, however he does undergo conditioning there. He's under threat of being posted disharmonious and unmutual. Undergoes a fake leucotomy, maintained by a hallucinatory drugged state of mind. Tranquillised, runs for public office in the elections, tries to escape, attempts to bring down The Village from within, and is put on trial. Has his identity taken away, and wakes up as somebody else! And later has a complete change of mind!! Spends time undermining No.2, intervening in an assassination plot, and generally poking his nose in where it's not wanted. Working out in The Village gymnasium, or his own private gymnasium in the woods. There's his semi weekly Kosho practise, chess matches down on the lawn of the Old People's Home. No.6 must have had a good deal of spare time on his hands.
Yet as time goes on it is somehow decided that they don't want to break No.6, that the "tissue" must not be damaged. They don't want a man of fragments, he is not like the others, he must be "won over." And then having survived the ultimate test of Degree Absolute, he is then not to be called No.6 or indeed any number at all "Sir" is his new title. And the reason behind his resignation no longer seems to matter to the Assembly, as "Sir" is offered ultimate power, and the chance to meet No.1. But it avails him nothing. Because you see No.6 is just as much a prisoner at the end as he was at the beginning, just like you and me really. Except that the spotlight is more on No.6 than it is us, which is just as well really. Because there's nothing wrong with living a quiet existence, no-one bothers you much that way.

Be seeing you
Posted by David Stimpson at 09:00