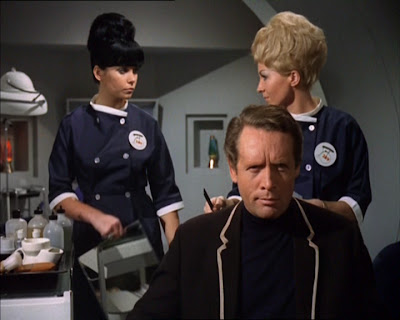 I was inspired to post this because of a comment made by Anonymous yesterday, who suggested that the two girls have the same numbered badge. So I took a close look, and it is difficult to tell, but as far as I can make out, the two hairdressers are wearing a badge numbered 249. As Anonymous suggested, perhaps it should have been No.249 and No.249b, as in the reporter No.113 and the photographer No.113b. But in this case they seem to have dropped the "b"!
Footnote: of course the photographer in 'Free For All' had a twin, the operator of The Tally Ho dispenser, I suppose his numbered badge would be 113c. But we'll never know as he doesn't wear a badge at all! In fact neither does the photographer, or the reporter!