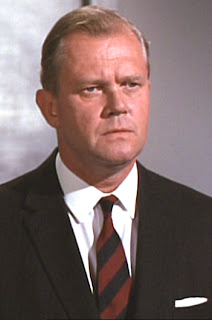 What can take place in the Village can have an effect on the outside world. Take the Colonel here. He was brought to the Village in order to take part in the finding of Professor Jacob Seltzman. He was completely aware of what he was letting himself in for, as he said to No.2 "I'd appreciate knowing my duties as soon as possible." All he knew is that he was sent to the Village by the highest authority.
The Colonel did leave the Village, if only in body and not mind. So really the Colonel died in the Village, his mind wrongly housed in the body of Seltzman. And the effect on the outside world? Well obviously his death would have to be explained to the department for which the Colonel worked. And was he married? If he was, what would they tell his widow? But it doesn't quite end there, because out there, somewhere, is the Colonel who to all intents and purposes is alive and well, even if he's not in his right mind!

BCNU
Posted by David Stimpson at 08:45