To me it is blindingly obvious that the experiment of Speedlearn had been going for quite a long time. Yet when No.6 it talking to the waiter at the outset of the episode, he appears to have no knowledge of it of Speedlearn and asks the waiter "Who's the General?" 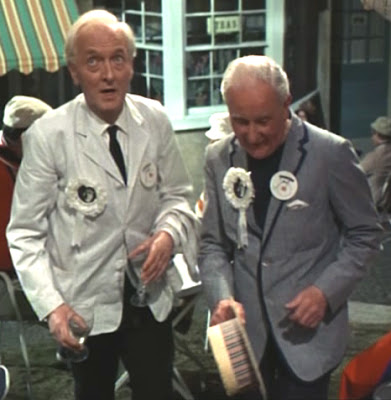 The gentleman in the grey jacket pictured with the waiter, is No.51 Later, he can be seen as No.69, a Top Hat offical of Administration. 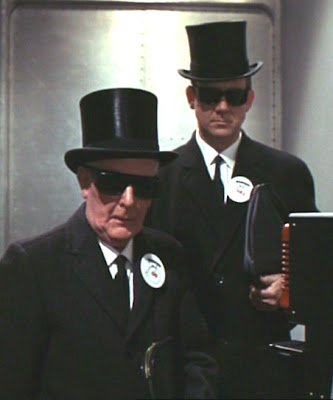 Promotion is one thing, or perhaps it was 51's day off. But a change of number, that's something else.
In fact the actor playing 51 and 69 is Ian Flemming, and I think that he is the only actor to play two different characters in 'the Prisoner.' Yes there is Oliver MacGreevy the electrician and gardener in 'Arrival,' but they were supposed to be twins. As was Dene Cooper the photographer No.113b and the Tally Ho dispenser operator in 'Free For All.' And then there's Michael Miller who played two parts, No.256 a Guardian in 'The General,' and No.93 who confesses that he is inadequate in 'A Change of Mind,' but two different episodes of course. 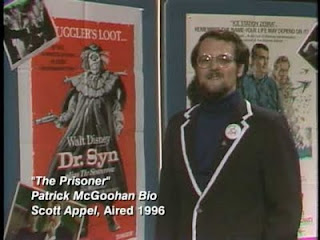 During the airing of The Prisoner on KTEH, PBS for the Silicon Valley, host Scott Appel {seen above} enlightened viewers with a wide variety of information about the programme and its cast. In this clip, Scott discusses the symbolism found throughout the show, from the umbrellas to the high wheeler bicycle to the Butler.
Scott Appel said that Ian Flemming who played both the man at the cafe and Top Hat Administration office was the Ian Flemming who wrote the James Bond novels. The only thing wrong with that, is novelist Ian Flemming died in 1964.
For a taste of Scott Appel, click on the link below.