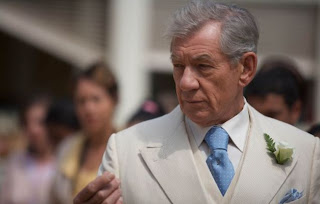 Sir Ian McKellen as Number Two in The Prisoner. Photo copyright of Granada TV/AMC
IN the 1960s British TV series The Prisoner, a character named simply Number Two was the overseer of The Village, a remote seaside community that welcomed new “residents” but rarely allowed anyone to leave – at least alive. When an ex-British Secret Service agent, Number Six (played by actor and series co-creator Patrick McGoohan), was brought to The Village against his will, Number Two was assigned the task of finding out the truth behind why Six resigned from his job.
Over the course of the show’s 17-episode run, no less than 17 actors and actresses portrayed Number Two, with Leo McKern appearing three times and Colin Gordon appearing twice. Some stories featured more than one Number Two, including It’s Your Funeral, in which two incarnations of the character played major roles in the episode, while images of two others were seen as well.
This Sunday, November 15th, AMC will air the first two episodes of its six-part miniseries remake of The Prisoner. Award-winning British stage, feature film and TV actor Sir Ian McKellen assumes the role of Number Two and, like his predecessors, is equally dogged when it comes to finding out Number Six’s (Jim Caviezel) true agenda. In the following AMC press Q & A, Sir Ian McKellen talks about the 2009 miniseries and his role in it.

Why did The Prisoner interest you?
Ian McKellen - This is the sort of thing I would enjoy watching myself and that is always the test. It also arrived at the right time – I wanted to work and, to top it all, it brought me to . Now, it’s more intriguing than when I first read it. It’s a thriller and unlike the original series, this is much more about what Six wants to escape from and why he can’t escape. There are clues from the very first scene in the opening episode.

Who is Two?
IM - In the original series, Two was running The Village. More than that, he was played by a different actor for each episode, but this time there’s just me playing the part. Two appears to be in charge of The Village and he has the qualities of someone who might well be that. If you like The Village, you’d accept him as your leader and revere him, but if you don’t like The Village, you’d think he is a monster. I personally don’t think he’s creepy at all. 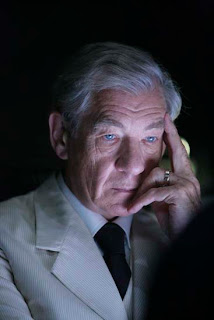 What about Two’s family?
IM - It is no secret that Two has a family. He has a son in his late teens and he has a wife who’s comatose and with whom he is madly in love. So he has a wife who he can’t really talk to, and a son who doesn’t want to talk to him. He loves them both and it is his love for them both that sets the whole story rollicking along. Does he bring Six to The Village to take over from him or does it become his motive as the story goes on? You never know with The Village.

Why is The Prisoner so compelling?
IM - Once you get involved with something as good as this you find out things you didn’t know before. I read online about people who indulge in mutual dreaming. Sometimes the dreams are identical. I suppose Bill Gallagher [who wrote this re-imagined version of The Prisoner] knew that, and if he didn’t, is very perceptive to these things. What I like about The Prisoner are all the oddities, the strangeness and the peculiarities. Portmerion [the setting in which the original 60s Prisoner was shot] doesn’t look real. It’s a fantasy. Bill Gallagher’s Prisoner is set in a more believable place and one that clearly has a style to it. Swakopmund has the feel of a prison, with the mighty on one side of the town and desert on the other side.

Are there similarities to the original?
IM - There are references back to the original and there are characters that appear in the original that appear in this. I don’t think it is any secret that Rover is back. In this, as opposed to the original, we discover where Rover comes from. Questions are answered. People who enjoyed the original might ask why have you cast an American and not an Englishman in the central role? It all will be answered. The Prisoner is being re-imagined by a group of people who are fans of the original.
Two shares a family moment with his son, 11-12 (Jamie Campbell Bower) and wife, M2 (Rachael Blake). Photo copyright of Granada TV/AMC

What do you think The Prisoner is about?
IM - It is about relationships in the context of things which preoccupy us. It is about the nature of government today, about the state of mental health, about conspiracy theories. It is a thriller because exciting things happen, and if you are interested to know why they happen  you would want to watch the next episode. The story plays with current observations just like the original did.
The Prisoner debuts with two episodes on Sunday, November 15th @ /PST and continues at the same time on Monday, the 16th and Tuesday, the 17th. Watch for more Q & As well as cast interviews as the week goes on.
As noted above, all photos copyright of Granada TV and AMC, so please no unauthorized copying or duplicating of any kind. Thanks!