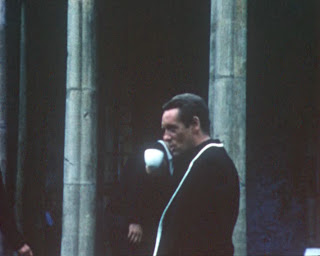 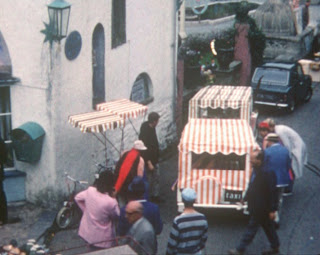 The two pictures above have been taken from 8mm amateur film footage shot at Portmeirion in September 1966 during the filming of 'the Prisoner.' It can be found in 'the 40th Prisoner anniversary' DVD box set. The film footage is quite remarkable, and one aspect shows just how it was possible for ordinary members of the general public, day visitors to Portmeirion, to get close to Patrick McGoohan.
However, more remakable is the film footage which can be viewed via the links below. They were supplied to me by my good friend Simon Wells, who has written on film and music for numerous magazines and newspapers including the Guardian; The Times and The Independent. He is a regular contributor to Record Collector, Hotdog, TV Zone, Watch, Total Film, and the Beatles' Book; the group's official magazine. In addition to his writing credits, Simon has researched numerous projects for the likes of the BBC, Channel Four and Virgin, as well as broadcasting live on LBC, ITN and BBC on film and music.
Simon has recently published his debut novel 'Tripping The Horse.'

Filming of The Prisoner. Helicopter takes off from Portmeirion flies out into the estuary and lands again. Raw location footage from World Backgrounds

Raw footage of McGoohan on raft from 'Many Happy Returns'. Sourced from World Backgrounds

When you have clicked on the following link you will be asked to install QUICKTIME if you do not already have it installed in your computer. To do so only takes a few minutes, but it will be worthwhile, as the film footage is quite remakable. And clearly demonstrates why it would have been impossible for No.6 to have survived 25 days at sea aboard his open raft in 'Many Happy Returns!'
http://www.chumblinmedia.com/play_stockfootage.php?psfu=./pages/assets_clip/popup_play.php?random_numb=0.392394770302246&session_numb=4513936&session_numbbis=323295610327000000000&language_numb=1&business_numb=1008&shot_numb=305109 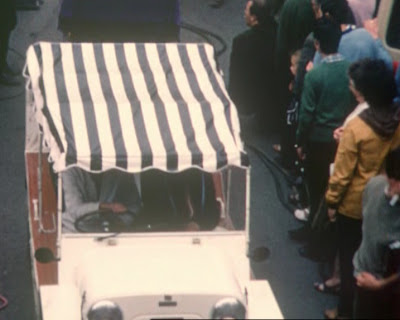 Here is the Village hearse on the day of Cobb's funeral in 'Arrival', distinctive by it's black and white striped canopy. Observe the lack of canopied penny farthing on the bonnet, and how close day visitors are to the action! 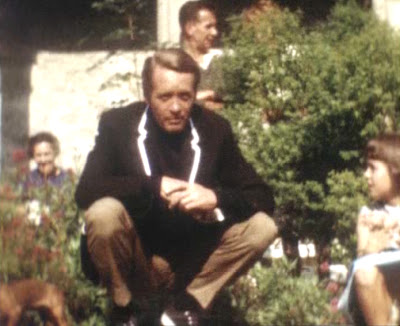 Partick McGoohan on his haunches, observing the human chessmatch. Who is the little girl on his left I wonder?
Be seeing you
Posted by David Stimpson at 09:23