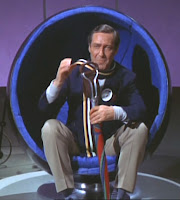 So if we are to interpret correctly the words of No.2, then it appears that the Prisoner has already told them the reason for his resignation. Certainly when one takes into account the Prisoner handing in his letter of resignation, ranting and raving at the bureaucrat sat behind the desk during the opening sequence, he must have said something. If anyone knows why the Prisoner resigned it's that man. I suppose the bureaucrat would have to write a report on the matter. To tell a superior just what the Prisoner had said. Hence No.2 knowing and believing the Prisoner's story, that it was a matter of principle!