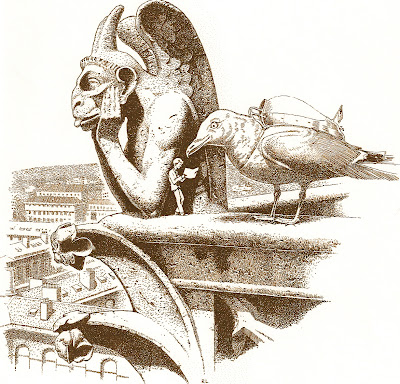 Gargoyle "I'm on the horns of a dilemma. Allegorically speaking does it really mean anything?"
Small boy "Its says here that if you call something allegorical, it can mean anything at all."
Gargoyle "Oh I don't know, I'm in two minds about it."
"Your Id is struggling against your ego."
"Is it, well there you are then."
Small boy "Bird, have you seen the Prisoner?"
Bird "Do I look like a prison warder?"
"It's a television series about a man who resigns his job, and gets abducted to the Village."
"I don't care for it."
Gragoyle "Can't say as I blame you. It's alright, but then people come along and give you their interpretations of it. They try and tell you what was in the man's mind."
Bird "Whose mind?"
"Oh him, you know."
"That's just the trouble I don't know."
"And you'd be right, no-one knows."
Boy "He means Patrick McGoohan."
Bird "Are there any like me in this series?"
"Yes, pigeons, sea gulls, and cormorants."
Gargoyle "Two of my kind are in 'Village Day.'
Small Bay"I've seen that film, there aren't any gargoyles in it!"
"There are in the book of the film."
"Really?"
"Would I make up something like that?"
"Is it published yet?"
"No."
"Oh!"
Gargoyle "Go on, read to me again that bit about 'Fall Out' being an allegorical ending to an enigmatic series."
Bird "I thought you were fed up with thinking about it?"
"What else is there for me to do up here all day?"