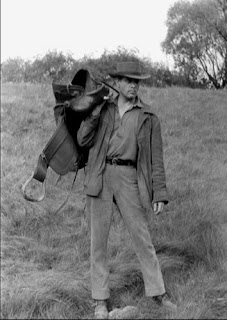 A Stranger Saddled With So Much Burden!

For those fans of ‘the Prisoner’ who are of a religious nature, you might see the Man with No Name in ‘Living In Harmony’ as a representation of Christ carrying his cross to his crucifixion. I suppose it could be interpreted that way. But realistically, it’s how a man in the American Wild West would carry his saddle after losing his horse - for whatever reason - until he was able to get another horse.

However, the other day when I looked at this picture, I saw a man saddled with so much burden, as with the Prisoner burdened with the reason behind his resignation! But I'm sure that interpretation has nothing to do with it either!

Be seeing you.
Posted by David Stimpson at 08:09