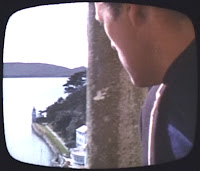 Is that what you would call our friend No.6, an eccentric? Well what else would you call a man who daily climbs the , who satisfies another eccentrics eccentricities, by sitting to have his portrait painted in ‘It's Your Funeral.’
In the case of the latter, No.6 only sits to have his portrait painted so as to learn from No.18 about Jammers, so you see there is always a reason why No.6 does something. As for the former, well I'm not so sure No.6 likes the view that much to warrant him climbing the on a daily basis. It could be that he's still looking for a sign from his world, a light, a boat, or a plane, in much the same way as he did that night of the ‘Dance of the Dead.’

Things To Do Today 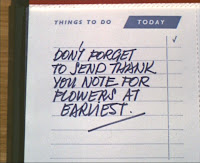 These are the words written on the Prisoner's desk pad. Now who do you think would be sending the Prisoner flowers? This image was taken from the episode of Arrival, and the only person who might very well send flowers to the Prisoner would be his fiancée Janet Portland. Ah, but then Janet Portland wasn't written into the Prisoner until the episode Do Not Forsake Me Oh My Darling by Vincent Tilsley. At the time of the writing of the script for Arrival written by George Markstein and David Tomblin, Janet Portland had never been thought of, let alone the Prisoner having a fiancée. So I just wonder who had been sending the Prisoner flowers? It must have been someone he knew, someone close to him to warrant the sending of a thank you note. This is one of the enigmas of the Prisoner that can never be answered, something we can live without knowing, but at the same time something to speculate about in a quiet moment.