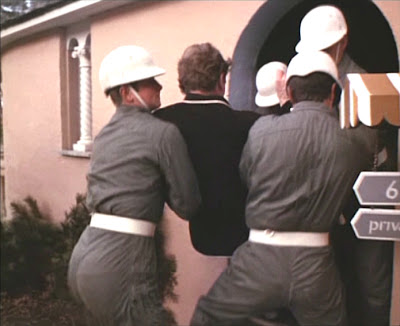 Number six abducted from his home! I wonder why they went to such extreme measures, when 'they' could have made it so much easier for themselves. After all in the past 'they' have come for him in the night, when Number Six had been sedated with a sleeping daught in his nightcap of hot chocolate.
But after this somewhat violent abduction, the four security guards put Number 6 in a Red Cross trailer, and then he must have been heavily sedated, as the subject is un-restrained, and no longer struggling.
BCNU
Posted by David Stimpson at 07:57