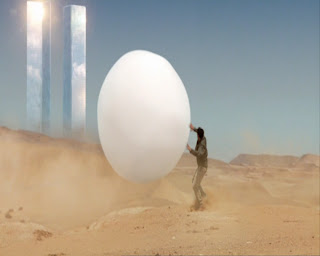 So, just what is the Village Guardian's role in THEPRIS6NER? In the original series the Guardian was peacekeeper, patrolling the Village, and activated to pursue anyone who attempted to escape. But here, Rover, seems to be confined to the desert and the mountains, along with the Therapy Zone. But mind you, Rover seems now to be able to reach gigantic proportions, being far removed from it's original 6 feet in circumference.
I am reliably informed, that in the final episode we discover the origin of the Village Guardian, something we never knew in the original series. So it will be interesting to learn scriptwriter Bill Gallagher's take on the origins of Rover! 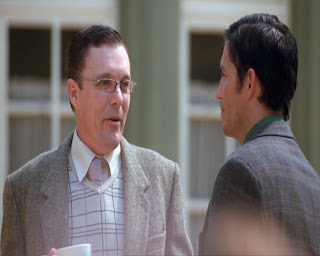 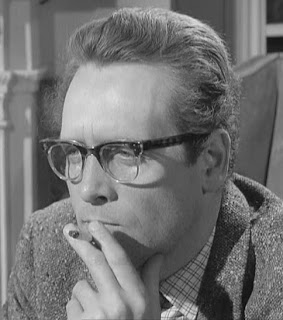 I know this bloke don't I, the bloke wearing the spectacles? It's 1955, but the face is very familiar to me. He puts me in mind of another school teacher John Kieron of the 'Danger Man' episode 'Don't Nail Him Yet.' I wonder if this is a "nod" as they've termed such homage’s to 'the Prisoner,' but in this case Patrick McGoohan as John Kieron, who was John Drakes "undercover" character when he was trying to get close to Rawson in Don't Nail Him Yet. I could be wrong of course, but there's something about 1955, just as there is about the old man's apartment, that 93. It's not a direct copy of '6 Private' but there's something familiar about it nonetheless for that.

I've also come up with a theory as to why Six was brought to the Village, and why Two was so eager for Six to marry 4-15, possibly to replace Two, and Two's wife M2. But I've got to wait over a week to see if this hypothesis is the right one. 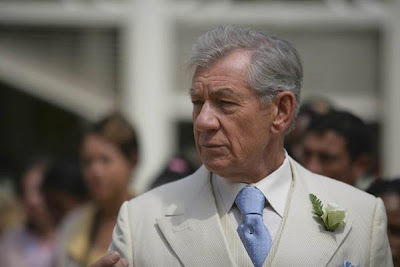 Okay, I've got the clothes, the hat, and the ties. Now I wonder where I can get a "2" tie pin like Two's?  It is a complete on-off, was made especially for Ian McKellen. Have you noticed the subtlety of wearing your number in new Village? Two wears a "2" tie pin, and Six's number is embroidered on his pullover. And then there is the subtlety in the difference in the numbered badges wron by citizens in the Village, which are either round, oblong, with or witout the Village logo. 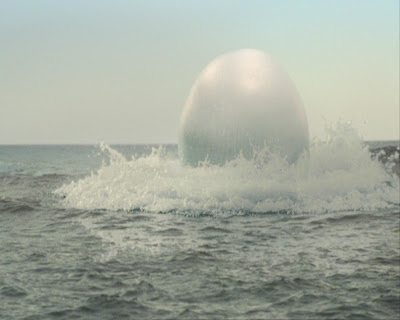 And just as 16 thought it was safe to go back into the water!
It's good to see the Village Guardian back in gainful employment. THEPRIS6NER would not have been the same without "it." Not that THEPRIS6NER was the same, because it wasn't, nor was it meant to be, so you can't catch me out on that one.
Apparently there were discussions about having a new Guardian for the series. But I'm glad that someone chirped up and said what about keeping with the original? Quite right say I. Why go with something new and untried, when you've already got something which works, and is the very iconic image of ‘the Prisoner.’ All that remained to do was jazz the Guardian up a little, bring "it" into the 21st century.

DAS-BCNU
Posted by David Stimpson at 08:39