A Favourite Scene From the Prisoner 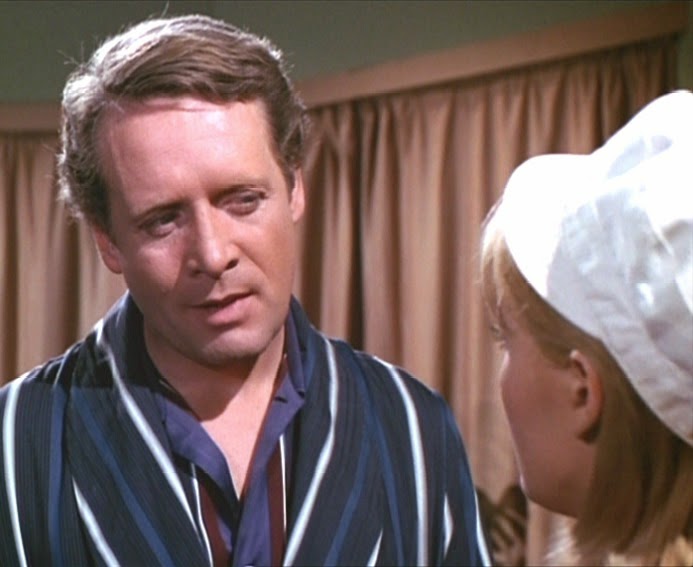 When early one morning a young blonde girl, wearing a white cap, dressed in a white and orange jersey and white slacks, tentatively steps as she approaches the cottage ‘6 Private.’ The occupant of which is still in bed. The girl opens the cottage door and enters.
“At last!” says the Supervisor-Number 26.
On the wall screen Number 50 makes her way into the bedroom, and just as she is about to wake the apparently slumbering figure of Number 6, he grabs hold of her wrist and pulls her down onto the bed!
“What are you doing here?” he barks.
“I was just about to wake you up” she tells him.
“You have” he says pulling the girl onto the bed {naughty naughty!} “Who are you?” he shouts getting up and donning his dressing gown.
Apparently the girl is just a number, does it matter which?
“How did you get in here?”
“The door was open” she tells him.
“Always is to them…….isn’t it?
“I’m not one of them!” the girl insists.
“No, what do you want?” asks Number 6 suspiciously.
“Help.”
“Go to the Town Hall the citizens Council promises help and advice to everyone.”
The girl protests “Their Citizens Council.”
“As far as I’m concerned, what’s theirs is yours” Number 6 tells her.
“I am not one of them!”t
No, no-one is. Go back, tell them I was not interested, that I wouldn’t even listen. What’s the point, they know already. I won’t go for it, whatever it is, so you may as well stop trying” Number 6 shouts showing Number 50 the door.
{Control Room scene with Supervisor and interim No.2}
The young woman comes round and puts the glass of water to her lips, she claims exhaustion, no it was drugs, her pupils are dilated. But Number 50 claims not to take drugs, so it must be forced feeding! Number 6 condescends to listen to Number 50’s story, just as long as what she says doesn’t become too obviously phoney.
Number 50 gets to her feet telling Number 6 that she will find help somewhere else.
“They told you to find it here didn’t they?”
“Think what you like it doesn’t matter any more” she tells him “no, it does matter. This concerns the welfare of everybody in this Village.”
“And welfare is out biggest consumer item yes?”
“Joke about this if you can, assassination!”
“What you trying to organise or prevent one?”
“Prevent! They would have to take reprisals, everybody would suffer.”
“Alright, what can I do for you?”
“I just told you, I need your help in preventing an assassination” the girl pleads.
“They’ve heard, they are aware, and they don’t need anyone’s help!” shouts Number 6 so to remind the Observers.
“They don’t believe me!”
“No comment.”
“So much caution in a man like him, it seems so wrong!”
“Many times bitten forever shy. But they are not shy, they love to listen.”
“You don’t understand, my name, my number on a list.”
“Honours or deportation?” quips Number 6.
“Jamming!”
“Jamming! What domestic science?”
“You’ll learn about Jamming one of these days, it’s one of the most important ways of fighting back.”
“Alright enlighten me now.”
“No! I tell lies remember? I’m sorry I ever bothered you!” the girl tells him and storms off out of the cottage.
“Call in any time you like” says Number 6 to himself.

Because I recall how my wife and I performed a re-enactment of that scene on a Friday evening in the Hercules Hall at a  Prisoner convention. Afterwards Max Hora came up to me and said “You are the Prisoner’ shaking me by the hand. Such was my impersonation of the Prisoner, complete with voice expressions, mannerisms. There was one mannerism I had that no-one would tell me about, not even my wife, for fear that I would stop doing it. Playing the role of the Prisoner, getting into the character that was both Number 6 and Patrick McGoohan I found extremely natural and easy to do.

BCNU
Posted by David Stimpson at 08:16