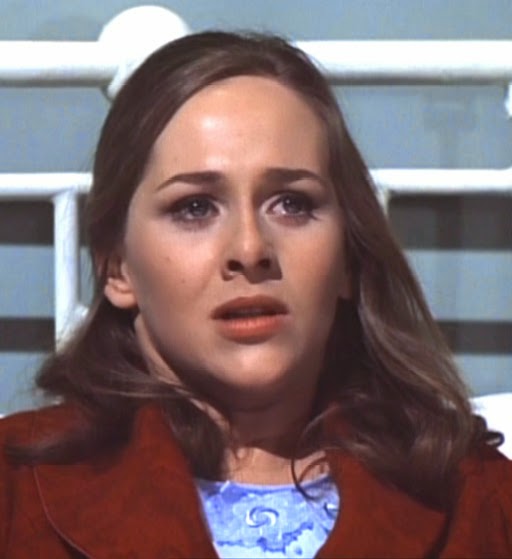 The Village must have come as quite a shock to Number 73. There she was probably living quietly at home, while her husband was somewhere over there, presumably behind the Iron Curtain although there is no evidence for that. But wherever he was he had some work to finish. No.2 and The Village administration wanted to know where her husband is, and because they couldn't find him, they had his wife abducted and brought to The Village. She might have woken up in what she thought was her own home, just as both Number 6 and Nadia had done on the day of their arrivals. But there she was, without a friend in the world, well in The Village. And faced with an interrogator who will stop at nothing to get the information he required. There is no way we can know what experiences 73 had during her time in The Village, one can only surmise from her slashed wrists as she first attempted suicide, that she was far from happy in her new surroundings. She wanted to escape her tormented ordeal, the only way she could do that was by jumping to her death through the hospital window.
Not only had they taken 73 from her ordinary, yet comfortable environment and placed her in The Village where everyone was a stranger to her. But Number 2 attempted to destroy her memory of her devoted husband, to break her spirit, in order to get what he wanted. After all 73 only has Number 2's word for Mariha. Yes he has a photograph, a photograph you understand, and not a series of photographs. And yet photographs can be manipulated. So this poor woman, through lack of hope and out of despair, took the only way out available to her. However 73 was remembered by at least one person, hence the daffodils laid upon her grave.

BCNU
Posted by David Stimpson at 08:09