With this series there is no question of which side runs The Village, only who? And that's Summakor. Unlike the former Number 6 who is abducted to The Village, and wakes up in what he thinks is his own home, the Prisoner, Six, in this series, is not abducted to The Village. He wakes up somewhere in a desert, and is left to his own devices to find The Village himself! And there is one distinct advantage to this series, we actually know the Prisoner's name, albeit only his first name, which is more than one can be certain about Peter Smith!
The old man 93 is a representation of the former Number 6. It was thought by a number of enthusiasts of the original series of 'the Prisoner,' that it is all in the mind. Even to arrive at the theory that the Prisoner-Number 6 actually created the Village in his subconscious mind. Well that is the main basis of this series, that The Village is in everyone's subconscious mind, planted there by bio-chemists working for Summakor. In fact Curtis suggests to Michael that if there is one level of the subconscious mind, then why not two, three or more levels, and what if we could go there? And is that what might have happened to the former Number 6, that he descended into lower levels of the unconscious mind, into another Village as 93? I know I should not try to mix the two series, and normally I wouldn't, But it was Production Designer Michael Pickwoad who said that 93 is a representation of the former Number 6, so that set my mind thinking. And inspriration taken from the original series can be seen in the interior design of 93's apartment.

The Village Guardian is an iconic visualisation of 'the Prisoner,' there had certainly been nothing like it before, and that makes it unique and completely irreplaceable. I know that the production crew did look at other designs for The Village Guardian, but at the end of the day there was nothing for it than to use the original Guardian, even though "it" has been upgraded by the use of CGI. In this series there is no Supervisor or Number 2 in a Control Room to issue an Orange Alert. There is no containment area for the Guardian at the bottom of the sea from which the membranic thing emerges. Although it does emerge from the sea in the episode of 'Harmony,' except the sea doesn't really exist. And yet the sea does feature on the Map of The Village. There is of course another way of looking at The Village Guardian other than a physical, genetically engineered being. There is the symbolic side to 'Rover,' that when faced with the Guardian one is faced with one's own worst fear, whatever that fear maybe. And that it is conjured up in the subconscious mind. And that is what Ian McKellen said of THEPRIS6NER, that we discover the origin of Rover. That it is conjured up in the Prisoner's mind by his fear. As when he's about to try and escape the Village. When he fears he's going to lose the woman he loves 4-15. The Guardian is Six's own fear which he cannot face up to!
The Village, in the desert, well what's so unusual about that? This wouldn't be the first time, as the cover design of the novel 'The Prisoner's Dilemma' would appear to indicate. 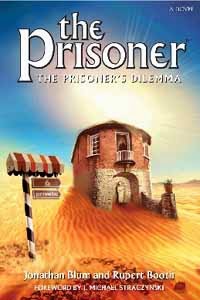 THEPRIS6NER has a distinct advantage over the original series, in that with Patrick McGoohan's creation when people of my generation first watched the series there is was gone! There was no-way of watching 'the Prisoner' again not until it was repeated on ITV television, there being no video recorders for the masses as would become available in later years, let alone DVD. So without the possibility of recording THEPRIS6NER, and able to purchase the series on DVD as soon as the television screening was over, the effect would have been very much the same as with the original, being left with what memories of the series one could retain! However having been able to watch again THEPRIS6NER so soon after it's television screening certainly helped me understand it a whole lot quicker than I could the original.