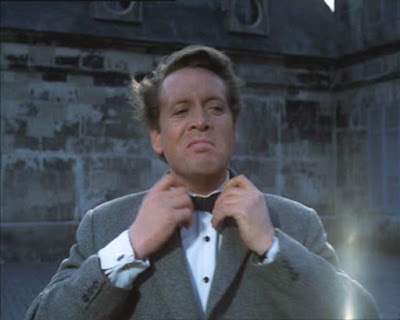 In ‘A B and C’ when Number 6 has been abducted {what’s new} this time by ‘A’ and his henchmen. It seems ‘A’ never could take a hint.
“I don’t want a hint, I want you…………. I’m saving myself money!”
They take Number 6 on a ride through Paris, which hasn’t changed much, and out into the countryside to a château.
“Well you’re in my country now.” {What did he mean by that? Don’t tell me ‘A’ defected to France, or perhaps the car journey was longer than thought!}
Number 6 claims diplomatic immunity. However he likes travel, it broadens the mind, and he punches ‘A’ on the chin. He then attacks the armed henchman, who does not dare shoot the Prisoner. ‘A’ comes back at the Prisoner, punching him on the chin.
“Let us stay on different sides!”
‘A’ makes a grab for the Prisoner who dodges out of the way, and ‘A’ is left to fly over the bonnet of the Citroen car, and then viciously finishes off the henchman, before he straightens his bow tie, and with a sniff, utters those immortal words
“Be seeing you.”
Posted by David Stimpson at 08:23