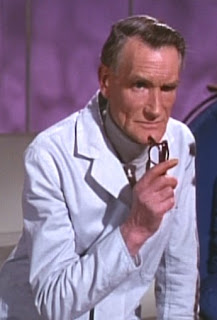 I’m surprised really, to find you in ‘Dance of The Dead.’ After all it may have suited the episode to have had a female doctor instead. Perhaps the doctor Number 23 from ‘Checkmate,. I only say that because Dance of The Dead’ seems to be a female orientated episode. And it might be suggested that Number 23 is your female counterpart.

It has to be said that you appear to enjoy your work, that you will go to any lengths in order to extract information. Look at what you did to Roland Walter Dutton. The trouble was he didn’t have access to the “vital stuff,” he didn’t really know any more then he had already told you. But you allowed yourself to be carried away by your own enthusiasm for experimentation. One can only imagine what experiments you carried out on Dutton to make him talk. And how far you went in order to reduce him to a brain dead imbecile!
You thought that you could make Number 6 talk, you thought your experiment with Number 6 was going to work because you had used it before, and it had always worked. But you made the mistake of underestimating Number 6. He’s not like Dutton and all the rest, he would have died before telling you anything.
Footnote: It’s a pity the scene in which the doctor had one of his failed experiments buried was not retained for the finished episode. But perhaps that was considered to be too dark a scene to include, even for ‘Dance of the Dead!’