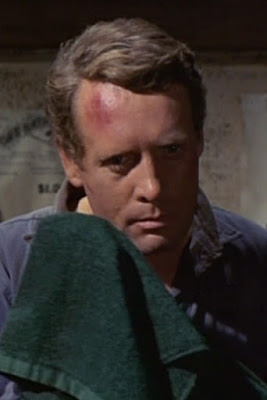 But where’s the harm in Living In Harmony? Ho harm at all one should think, seeing as its all part of a form of virtual reality. There are only four people who are actually involved, Number’s 2, 22, 8, and The Man With No Name {Number 6}, and he’s the only one of the four to set foot in the American frontier town of Harmony. So when it comes to the scene where Zeke and the boys teach The Man With No Name its not safe to go about without wearing a gun, Zeke and the boys don’t really exist. That being the case, where did The Man With No Name get those bruises? And if comes to that, how did he manage to get those grazes on his hand and cheek, when the Kid was trying to provoke him into going for the gun on the bar in the Saloon? The bruises, the grazes, are all for effect. With Zeke and the boys, as well as all the other townspeople of Harmony, all there for the benefit of the television viewer. Otherwise the game would have been given away if Number 6 was seen to be the only person in Harmony. The illusion broken as the television viewer would have separated fact from fantasy too quickly. When Number 6 is in a fist-fight with “Zeke and the boys,” he’s seeing them in his mind, when in fact he’s all alone. Throwing punches, throwing himself about, and rolling on the ground, manhandling Zeke to the ground, taking imaginary punches, and getting beaten up by imaginary people. And when Number 6 finally comes to his senses, apparently having been shot by the Judge, the bruises and grazes are not there, and were never there in the first place!
Living In harmony……it’s all in the mind!