A Question of Identity! 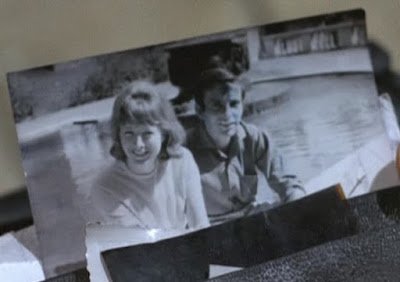 The above photograph was found in a wallet, taken from the dead man’s pocket by Number 6, who found the body on the beach one morning in ‘Dance of The Dead.’ There was nothing else in the wallet to give identity to the man, the other items, a few raffle tickets.
The background in the photograph identifies that it was taken by the pool and fountain in the piazza of The Village. The young woman appears to be in Village attire, but wears no badge on her jersey. As for the man, he is wearing an open necked shirt, not of regular Village attire, and he is also not wearing a badge of identity. One can only suggest that the photograph was taken on the day of this man’s arrival, seeing as new arrivals to The Village wear their own clothes for a time. But why the photograph was taken is unknown, as is the identity of the young woman, as well the identity of the person who took the photograph. As for the identity of the man in the photograph, surely there can be no doubt of that. He’s Number 34, who was reported to his Observer-Number 240 by her Supervisor as being dead, and found on the beach by Number 6!