If Ernst and Gunter are just what they appear to be, gun runners, when Number 6 jumped overboard, and Gunter fired that pistol at him its just as well he missed. Not only for Number 6’s sake, but also that of The Village Administration, seeing what importance they place upon him!

But what if Gunter had not missed shooting Number 6, and he had actually shot dead him? Surely Mrs. Butterworth, who was awaiting Number 6’s arrival at No.1 Buckingham Place, would get worried when he didn’t turn up. At the very least she would have to contact…….contact who, the Colonel? After all the Colonel had been involved when Number 6 was supposed to have returned to an office he knew very well in London. And if the Colonel was involved with The Village, what then? Number 6 had either absconded once he made it to shore, or he had died in an accident at sea. If the former there would be the chance of re-capturing said escaped Prisoner. If the latter, surely a search at sea would clearly be pointless, unless they came across the raft still afloat. And even then, if it had been found, it would have drifted for miles and miles, and miles. And then to find the body of Number 6, even if currents, drift and tides were to be taken into account….well it would clearly be better to wait until the body of Number 6 washed up on a shore somewhere, if indeed it ever would. As for the two gun runners, they would be long gone, besides, anyone searching for Number 6 would have no knowledge of the gun runners involvement.
And what of The Village’s administration, all they have lost is a prize worthy Prisoner who had died in an accident at sea. Where there was one of his kind, there would be another. The name of James Bond springs to mind, but there might be the question of his morality. And yet he does have a ready made number 007 7. 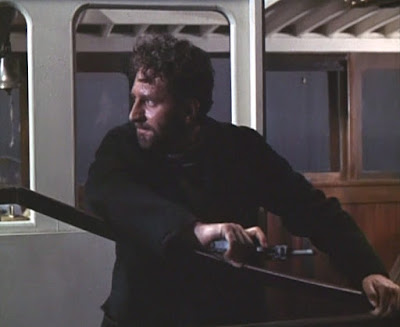 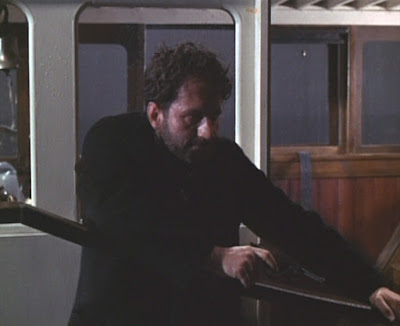 A friend of mine wrote recently in a comment “Dennis Chinnery seems genuinely peeved he missed when trying to shoot him at the end of the sequence!” That made me think about that end sequence again, and I agree Gunter does look angry that he missed shooting Number 6 with his pistol. But then I thought if Ernst and Gunter really wanted to kill Number 6, they could have gone after him as he swam away, then ramming him with their motor cruiser. The body of Number 6 mutilated by the vessel’s propeller as it passed over the body!