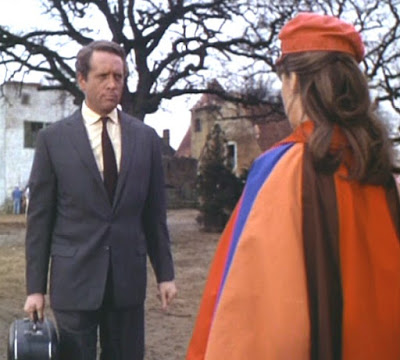 What’s she doing there?
Number 6, in the guise of Curtis was about to leave The Village {or so he thought}, but what was Alison-Number 24 doing there? Yes she told Number 6 that she wanted him to know that given a second chance she wouldn’t betray him again. But how did she know Number 6 was about to leave The Village by helicopter? He made no mention of it to her when Number 2 sent him to see Alison because she might have some insight into Number 6’s motivations. Although there seemed to be a small doubt in Number 2’s mind. Perhaps after Number 6 had left Alison’s cottage, Number 2 could have telephoned her to tell her to be at the helicopter at such and such a time. After all we don’t see everything which takes place in ‘the Prisoner.’ Thus making the reason for Alison being there, was simply to distract Number 6’s attention, while Number 2 spoke to the helicopter pilot about circling The Village before landing from where he took off. If that is the case about Alison in this scene, and it is only an idea, then it would make her out to be a liar! She told Number 6 that given a second chance she would betray again, but with my idea in mind she did, because she didn’t tell him what Number 2 was up to. Not that it would have done him much good if she had!