What’s All This Screaming About? 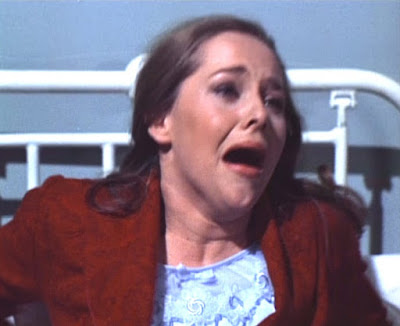 Number 2 had been asking Number 73 questions about her husband. It is obvious that she isn’t happy being in The Village, after all she’s there all alone and not a friend to be had. It’s no wonder she attempted suicide by slashing her wrists. And then there’s Number 2, demanding she tell him where her husband is. Oh he’s there somewhere over there, he had some business to finish. Number 2 shows just how devoted her husband is to 73, by showing a photograph of him with the woman Mariah! But that still doesn’t make 73 talk, she shuts her eyes to the photograph. Number 2 has wasted enough time on 73, he slams his leather document case and looks menacingly at the woman lying in the bed.
Was Number 2 really responsible for 73’s suicide? He may have been responsible for having 73 brought to The Village, in interrogating her. But 73 didn’t throw herself out of the window until Number 6 burst into the room. Number 6 goes to the window and looks down at the ground to see Number 73’s body lying there, perhaps just to make sure because of Cobb having committed suicide in the same way.
It might be Number 2 was about to lay his hands on 73, but we’ll never know, certainly it is suggested. I wonder what went through 73’s mind when she saw Number 6 suddenly burst into the room? But just a minute, Number 6 hears a woman screaming in the distance. He rushes to the hospital, the screaming becomes louder and more frantic. But as Number 6 bursts into the room, 73 is still lying in the bed and Number 2 is still standing there, he hasn’t laid a finger on 73. Yes the impression is given of Number 2 being menacing as the camera moves towards the bed, but as Number 6 bursts into the room Number 2 hasn’t moved! Perhaps it was 73’s imagination of what was about to happen to her, her fear, which drove her to suicide.