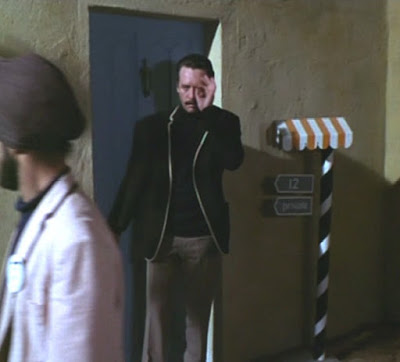 As Number 12 emerges from his cottage he is greeted by a passing Sikh
“Good morning Number Twelve.”
“Be seeing you” Number 12 salutes in response.
Curiously this is the only occasion on which we see anyone give The Village salute left-handed. And yet Patrick McGoohan while acting the part of Number 12, who is supposed to be left-handed, gives the salute in the same casual way as Number 6 does even when left-handed. I might have thought that seeing as Patrick McGoohan wasn’t supposed to be Number 6, would, as Number 12, given the salute in a more formal way. The hand less open at the end of the salute, but still with thumb and forefinger still linked!
Be seeing you
Posted by David Stimpson at 08:17